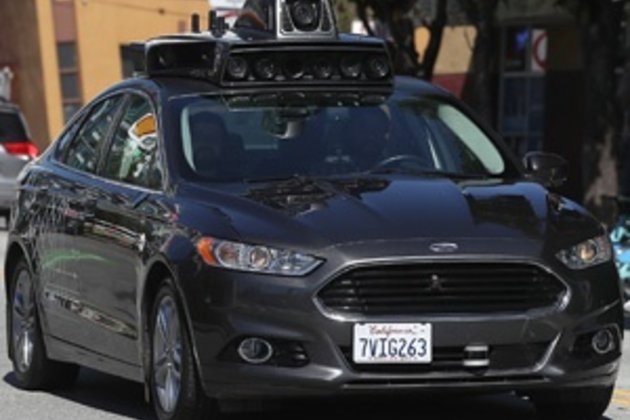 For four days in February, Ben Shukman showed up to his office at Phantom Auto in Mountain View, California, sat down in front of a bank of computer screens with a steering wheel in a darkened room, and began driving. As the 25-year-old turned the wheel in Silicon Valley, an empty truck 2,500 miles away in Atlanta picked up semi trailers and towed them around a warehouse lot.

From seven states away, Shukman backed trailers into loading docks and parking spaces. "We were able to do some maneuvers that were so difficult that there were truck drivers there that said that they could not do that," he said.

Phantom Auto was founded in 2017 to help bridge the gap between the vision and the reality of autonomous vehicles. It offers remote-driving technology that provides human intervention for construction zones, bad weather, roadside emergencies or anything else that might fluster the artificial intelligence piloting a driverless car. With Phantom Auto's software and a cellular connection, a trained human operator can take over a car and guide it through difficult spots.

Now the startup is announcing an expansion into logistics, providing remote operation capability for forklifts, delivery robots, and "yard truck" tractors that move trailers around warehouses and shipping centers. Phantom Auto on Thursday said it has raised $13.5 million in a round of financing lead by Bessemer Venture Partners. The company has raised roughly $19 million to date.

Phantom Auto's new line of business shows just how deep the current moment of disillusionment has become for the self-driving car industry. After years of development and more than $10 billion in investment, autonomous vehicles still aren't ready for widespread public use. Phantom Auto's original strategy was to fill gaps in robotaxi capabilities. But autonomous ride-hailing fleets have made little progress beyond testing and rarely operate without human safety drivers - sometimes working in pairs - sitting in the front seat.

Alphabet's Waymo is offering limited ride-hailing service to a small number of customers in suburban Phoenix, usually with a safety driver on board to take over if the robot fails as well as remote monitors who can intervene. Virtually no other autonomous startup is ferrying passengers through traffic-and that means little demand for Phantom Auto's remote-driving technology.

Phantom Auto says it has agreements to sell its technology to large automakers, so that faraway backup drivers can troubleshoot autonomous fleets once they hit the road. "We've talked to literally every major player in the space, and given the nature of what we do, we have to have pretty detailed discussions about their limitations, their capabilities, and their actual rollout dates," said co-founder Elliot Katz. "Everyone who says they're deploying, whatever they say they're deploying in the near term, it's completely false."

The startup decided to enter logistics as a way to survive in the meantime. Even the stopgap provider in the self-driving industry needed a stopgap strategy.

Yard trucks, forklifts and delivery vehicles offer a faster path to market because each operates at relatively low speeds, carry no passengers, and can be used without engaging with traffic on public roads. Katz said his company is also looking at possibilities in construction and mining. There is a strong appetite for automated and remote technology in these industries because professional operators can be hard to find and often don't live close to the job sites where they are needed.

Phantom's yard truck customers, according to Katz, include retailers with dozens of distribution centers across the country. Using remote operation, the startup can potentially service all of them from a central location, with drivers bouncing instantly from Alabama to Ohio to Oregon as needed.

If Phantom Auto or its rivals can make this vision real, it will dramatically expand and reshape the labor pool for industrial-vehicle operators. An early-stage venture fund within Google led a $ 6 million investment last year in Scotty Labs, a remote-driving equipment startup. Volvo Construction Equipment recently announced tests of remote-controlled wheel loaders over a 5G cellular network in Sweden.

"There's a deficit of talent available in our industry," said Scott Young, Volvo CE's vice president for customer support in the Americas. "This is how we bring the work to the talent pool." The legions of young people who play online video games, Young points out, are already learning to work on teams remotely, suggesting that the heavy equipment operator of the future could be more gamer than teamster.

Shukman, for one, doesn't fit the profile of the typical yard truck driver. A self-taught roboticist and programmer, he was an avid gamer during his college years at the University of California at Santa Barbara. He once wrote a strategy guide for the game League of Legends that has been viewed over four million times online.

Since joining Phantom two years ago, Shukman has helped test and develop its remote driving consoles. Most of the other remote drivers at Phantom started out as safety drivers at autonomous car developers. Phantom puts all of them through a training protocol that takes about two weeks and requires passing a series of tasks, such as remotely navigating a slalom course.

Shukman hadn't been inside of an actual yard truck until three months ago when Terberg Group, the Dutch manufacturer working with Phantom to put remote-driving systems into its trucks, delivered one to California for retrofitting. He spent a day doing drills and maneuvers in the real truck before moving back inside to practice on the remote console. It took him about two weeks before he felt comfortable.

"The big thing about that shift between driving locally and driving remotely-although it's different, it doesn't necessarily mean it's more difficult," said Shukman. A highlight reel released by Phantom shows Shukman backing into impossibly narrow spaces, and he describes the visibility on the monitors as superior to looking through a truck's windshield.

Most of Phantom Auto's warehouse clients plan to teach current truck operators to do the job remotely. A few drivers have already been through the training. "They were a little nervous at first," said Shukman, "and then within the two-week period they were nailing maneuvers that very few people can do."

It's too soon to tell, said Katz, whether gamers or truckers make for better remote operators. "The biggest thing that we stress," said Katz, "is even though you're sitting in a remote location and you're behind the screen, this is real life."