SUDBURY, ON / ACCESSWIRE / May 15, 2019 / Northern Superior Resources Inc. ('Northern Superior' or the 'Company') (TSXV: SUP; OCTQB: NSUPF), is pleased to report the discovery of eight gold-bearing structures and alteration zones, meeting the mandate of this specifically designed program. These discoveries represent a critical and important advance in defining bedrock-hosted high-grade gold mineralization, necessary to yield the unique world class gold grain-in-till dispersal apron and high-grade boulders defined and recovered within the Big Dam area of the Ti-pa-haa-kaa-ning (TPK) property.

Dr. T.F. Morris, President and CEO of Northern Superior, states: 'To be clear, the drill core assays reported here do not reflect the anomalous gold grain-in-till values or the high-grade gold boulder assays previously reported for the Big Dam area. It is very important to put into context the size of this core program relative to the target area. With only 15 core drill holes (diameter of each only 5 centimetres ('cm') completed, it is impressive that eight gold-bearing structures and associated alteration zones were intersected in an area of over eight square kilometres. The mandate of this program has been clearly met: to define a regional-scale, bedrock hosted mineralized system(s) capable of hosting economic concentration of gold as indicated by the unique regional scale gold signature observed within the overburden associated with the Big Dam area of the property.'

Morris further states: 'The results of this program provide an important opportunity to focus the next phase of drilling along the most prospective structure, defined from further analysis of the results. The purpose of that drill program, on this part of the property, will be to identify and define one or more of the gold-bearing zones responsible for yielding the anomalously high gold grain values and high-grade gold-bearing boulders recovered from the surface environment.'

As such, Northern Superior will now focus its efforts on:

Figure 1. Proposed location of structures and alteration zones intersected by the 2019 core drill program. Lateral extension of these features is interpreted from a combination of airborne magnetics and ground IP geophysical data. 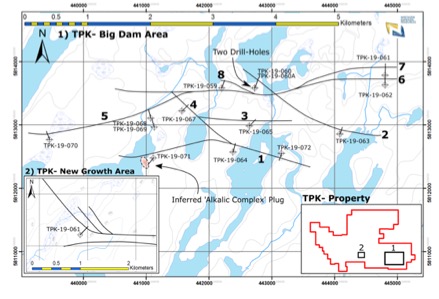 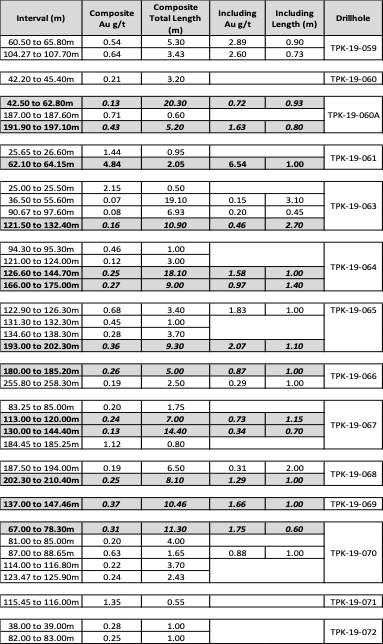 This gold-silver-copper property, located in northwestern Ontario, contains two large independent mineralized systems. The first gold-bearing area is contained within the Big Dam and New Growth areas of the property and is a laterally extensive mineralized shear system stretching 35km across the southern portion of the property. One of North America's largest gold grain-in-till dispersal aprons extends from this area. Gold grain anomalies of this scale are amalgamated responses from a cluster of gold-bearing zones, normally indicating a large gold system or district rather than a single gold-bearing zone (see Northern Superior Resources press releases, June 24, 2010, February 27, 2018, and November 26, 2018).

The second gold-bearing systemis contained within the Annex area of the property. This system is defined by a gold grain-in-till dispersal corridor. Mineralized boulders collected from within this corridor returned assay values of up to 727 g/t gold, 111 g/t silver, 4.1% copper (see Northern Superior Resources press release, June 25, 2012); and drill results returned grades of up to 4.62 g/t gold over 5.5m (see Northern Superior Resources press releases, June 25 and 26, 2012).

Northern Superior works with Neskantaga First Nation through an Early Exploration Benefits Agreement (EEBA) to ensure beneficial engagement for all stakeholders through the early exploration phases completed on the TPK property.

The Company will be hosting its Annual General Meeting at the Toronto Downtown Sheraton Hotel, 123 Queen Street West, York Room. The meeting will be held on May 22, 2019, and will begin at 4:15pm. Dr. Thomas F. Morris, President and CEO of Northern Superior will provide an overview of the Company's activities and strategy going forward in addition to the formal business of the meeting.

Jonathan O'Callaghan P.Geo., is a qualified person ('QP') within the meaning of National Instrument 43-101. As the QP for the TPK property, Mr. O'Callaghan has reviewed, and approved information disclosed in this press release.

Northern Superior is a reporting issuer in British Columbia, Alberta, Ontario and Quebec, and trades on the TSX Venture Exchange under the symbol SUP, and the OTCQB Venture Market under the symbol NSUPF. The Company is currently focused on initiating and executing core drill programs on its 100% owned TPK (northwestern Ontario) and Lac Surprise (Quebec) properties. Northern Superior is currently looking to option out its other 100% owned mineral properties in Quebec and northwestern Ontario.

WASHINGTON, DC - Under siege in the White House, President Donald Trump is aggravating America's latest racial anguish in a ...

JERUSALEM - Israel's defense minister apologized on Sunday for the Israeli police's deadly shooting of an unarmed Palestinian man who ...

DUBAI, UAE - The Dubai government is to relax restrictions on wearing face masks in public.Until Sunday, everyone regardless of ...

Something is Deeply Wrong in the American Psyche

NEW YORK, New York - U.S. stocks made modest gains on Monday, kicking off a new week, and month.With the ...

CO CORK, Ireland - A U.S. manufacturer of essential oils, health and wellness products is developing a manufacturing plant near ...

Dubai getting back to business after lengthy break

DUBAI, UAE - Malls throughout Dubai are slowly building their business after being dormant for some weeks due to the ...

SYDNEY, Australia - Stocks in Asia rallied sharply on Monday, as the U.S. dollar crumbled. The big winner on equity ...

News Corp's closing of its community and regional papers, with few remaining and others online-only, cancels centuries of beliefs about ...