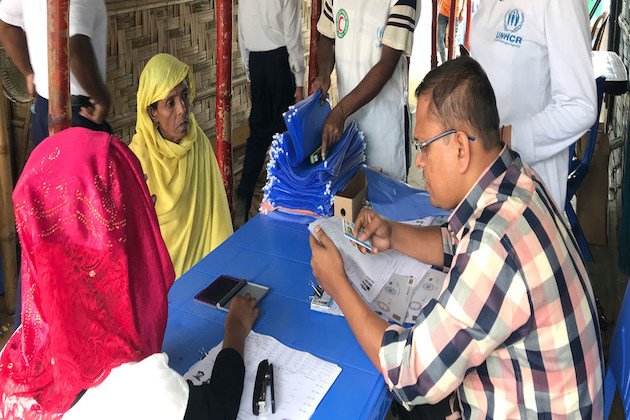 DHAKA, Bangladesh - More than 500,000 Rohingya refugees who fled a brutal crackdown in Myanmar two years ago, have received identification cards that the UN insisted on Friday were critical to safeguarding their right to return home.

Issued to all refugees over the age of 12, in camps in southern Bangladesh, the biometric, fraud-proof card is for many, the first time that they have owned an official document that proves their identity.

"Most of these people are stateless and most of these people have not had any form of identification document, so for the vast majority of the Rohingya refugees, this is the first ID, a first proof of identity that they have," UN Refugee Agency (UNHCR) spokesperson Andrej Mahecic told journalists in Geneva.

An estimated 900,000 Rohingya refugees live in crowded settlements in Cox's Bazar, according to UNHCR, which is working with the Bangladeshi authorities to complete the operation.

More than 740,000 of those in camps fled from neighbouring Myanmar in the last two years amid State-led violence described as tantamount to ethnic cleansing, by the then UN High Commissioner for Human Rights, Zeid Ra'ad Al Hussein.

"The point here is first and foremost to protect and safeguard the right of these people to return to the places they came from", Mr. Mahecic told journalists in Geneva.

The development comes amid ongoing reports of violence between State forces and ethnic separatists in Myanmar and concerns by UN-appointed rights experts and agencies that conditions are not suitable for the safe return of refugees in place such as Rakhine state.

"There are a number of agreements that have been signed both bilaterally and trilaterally in relation to the potential repatriation," Mr. Mahecic said, in reference to accords signed between the UN, Myanmar and Bangladesh, the aim of which is to create conditions that are suitable for the return of ethnic, predominantly Muslim Rohingya to Rakhine.

He added: "We have made clear all along, that any repatriation needs to be voluntary and it needs to be in line with the international standards."

On average, 5,000 refugees are registered daily, at seven different sites in Cox's Bazar.

More than 550 local staff have been recruited, UNHCR said, with the goal of completing the registration process during the last quarter of 2019.

Although the identity cards carry unique biometric data that includes fingerprints and iris scans, Mr. Mahecic stressed that they were not citizenship documents for Myanmar.

"These cards are basically their registration," he said. "They regulate their stay in Bangladesh. People will need to have obviously a pathway to citizenship, and a different set of identification if and when they return."

APIA, Samoa: The new prime minister of the island nation of Samoa has said she will cancel a Chinese-financed port ...

WASHINGTON, D.C.: President Joe Biden has announced that millions of federal workers will either need to show proof of having ...

German woman walked around for weeks with winning $39M ticket

BERLIN, Germany: A German woman walked around with a winning $39 million lottery ticket in her purse for weeks before ...

IJSSELSTEIN, Netherlands - Up-and-coming football talent Noah Gesser and his teenage brother have been killed in a head-on collision.Ajax's 16-year ...

Uber tells returning employees they must be vaccinated against Covid

WASHINGTON, D.C.: In a bid to reduce greenhouse gas pollution, the White House has asked automakers to voluntarily pledge to ...

NEW YORK CITY, New York: Pfizer has projected a 29 percent increase in the sales of its COVID-19 vaccine in ...

Biden says ban on rental evictions to end on Saturday

WASHINGTON, D.C.: The nationwide ban that prevents landlords from evicting those who do not pay their rent will expire Saturday.The ...