Keith Smith: 'You love to block for a guy like' Todd Gurley 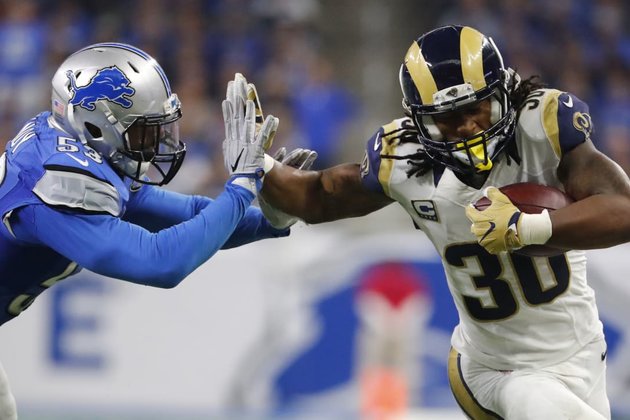 The Atlanta Falcons made a big splash at the running back position this offseason, adding former NFL Offensive Player of the Year Todd Gurley in free agency.

There has been plenty of speculation about the health of Gurley's knee, but he is just one season removed from being one of the dominant offensive weapons in the league. If Gurley is able to recapture that magic, he could push the Falcons' offense over the top.

It's fullback Keith Smith's job to help Gurley get Atlanta's run game back on track. The Rams didn't utilize a fullback, so it remains to be seen exactly how Gurley will perform with a lead blocker in front of him. He seems to be a natural fit in the Falcons' wide zone scheme, however, and Smith likes the way he runs with the football.

"I'm just excited for what he's going to bring, because I know he's got a ton of game left in him," Smith told Ian Rapoport on his podcast "Rapsheet + Friends."

"He's smooth, man. If you watch Todd, he's got great vision and he hits the hole and he goes. I just love that about him. I don't think he had a fullback in Los Angeles, so it's going to be dope to open up holes for him and see that part of his game open up for him.

"He's not an easy guy to tackle, and you always love guys like that. You love blocking for a guy like that, because you know he's going to make the first guy miss. Just knowing the type of player that he is, he's going to help our team a lot and I'm excited about that, man."

The Falcons ranked 30th in the NFL in 2019 with an average of 85.1 rushing yards per game. Atlanta parted ways with starting running back Devonta Freeman this offseason, but they bring back all of the other backs on their roster.

This deep stable of runners, which includes Ito Smith, Brian Hill and Qadree Ollison, will help the Falcons keep tabs on Gurley's health throughout the season. Atlanta has opted to utilize a committee of running backs in recent seasons, and that's not likely to change with Gurley now on the roster.

"Ito is coming off of injury," Falcons offensive coordinator Dirk Koetter said. "I thought Brian Hill and Qadree did a nice job of filling the roles they were asked to play last year. To their credit, they want more. They want bigger roles, and that's what they should do, come in and compete for those bigger roles. Ito was playing well up until the time that he got hurt."

There's no question, though, that Gurley, who gained 1,064 total yards of offense last season, with a dangerous No. 1 option out of the backfield. With the level of depth on the roster as well, perhaps the Falcons have the right ingredients to create an imposing ground game.