VANCOUVER, BC / ACCESSWIRE / July 29, 2020 / Kismet ResourcesCorp. (TSXV:KSMT.P) ('Kismet' or the 'Corporation') is pleased to announce that it has entered into a letter of intent dated July 23, 2020 (the 'LOI') with TDG Gold Corp. ('TDG Gold'), a mineral exploration company with binding agreements to acquire four properties in the Toodoggone District of northeastern British Columbia, Canada including the former producing high grade Au-Ag Baker and Shasta Mines and the Oxide Peak exploration stage property. The LOI outlines the principal terms and conditions which will result in a reverse takeover of Kismet by TDG Gold (the 'Transaction').

Kismet is a Capital Pool Company and intends for the Transaction to constitute its Qualifying Transaction, as such terms are defined in the policies of the TSX Venture Exchange (the 'TSXV'). In connection with the announcement of the LOI, the trading in the common shares of Kismet ('KismetShares') has been halted pursuant to the policies of the TSXV. Trading will remain halted until, among other things, Kismetcompletes certain regulatory filings in connection with the Qualifying Transaction with the TSXV and the TSXV has completed certain matters it considers necessary or advisable.

TDG Gold has binding agreements to acquire over 23,000 hectares in the Toodoggone District of northeastern British Columbia. The Toodoggone District is a 100 x 30 km belt (3000sq.km) with past producing mines and advance-stage exploration projects (see Fig 1) characterized by extensive gossans and alteration halos. Historic exploration and production focused on high-grade gold-silver epithermal deposits including the Baker, Shasta and Lawyers Mines. The property also has the potential to host copper-gold porphyry mineralization. 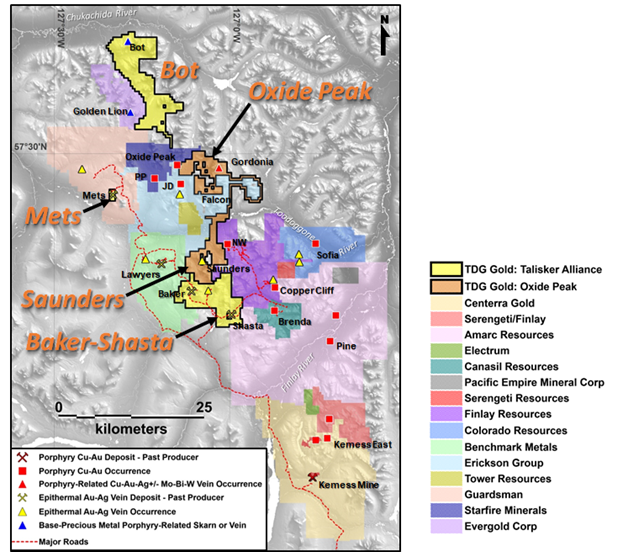 The transaction with Talisker is subject to certain conditions including TDG Gold achieving a public listing on a Canadian stock exchange and total minimum capital raises of $5,000,000. In addition, Talisker will receive a minimum of 30.12% of the Resulting Issuer Shares (as defined below) on a fully diluted basis at listing and will have an Investor Rights Agreement allowing them, amongst other things, representation on the TDG Gold Board of Directors whilst their ownership remains greater than 10% of TDG Gold's issued and outstanding shares.

In December 2019, TDG Gold signed an earn-in agreement with Arcwest Exploration Inc. ('Arcwest') to acquire up to an 80% interest in its Oxide Peak exploration project ('Oxide Peak'). Oxide Peak is an 8,437 hectare exploration stage property situated in the northern part of the Toodoggone gold-copper district in British Columbia. Oxide Peak contains multiple undrilled zones of copper-gold mineralization that have yet to undergo systematic mapping and geophysical surveys, in addition to zones of strong gold-in-stream sediment anomalies that have yet to be traced to source.

TDG Gold may earn up to a 60% interest in Oxide Peak subject to the satisfaction of certain conditions including incurring minimum exploration expenditures of $2,400,000 over a threeyear period. TDG Gold's first year exploration expenditure is $400,000 which is fully funded and the fieldwork component of the program is on schedule to be completed by the end of September 2020 (timing may be impacted by the continued spread of COVID-19).

If TDG Gold completes the 60% earn-in, it may earn an additional 20% interest (80% ownership in total) by completing a preliminary economic assessment. From that point, TDG Gold and Arcwest will form a joint venture in which each party will proportionately finance or dilute. Should TDG Gold's or Arcwest's interest be diluted to less than 10%, then that interest will convert to a 2% net smelter return royalty, of which 1% of the royalty can be bought back for a $2,000,000 cash payment.

TDG Gold is proud to have the opportunity to undertake mineral exploration in the traditional territories of the Tahltan, Kwadatcha, Tsay Keh Dene and Takla First Nations. TDG Gold views itself as a co-steward of the land and is engaging in early, active and respectful dialogue with representatives of each community. In June 2020, TDG Gold commissioned Falkirk Environmental Consulting Ltd. to facilitate its engagement with Indigenous communities and also in June 2020, TDG Gold signed a communications agreement with the Tahltan Nation.

Summary of the Transaction

It is currently anticipated that Kismet will acquire TDG Gold by way of a three-corner amalgamation, share exchange, plan of arrangement or other similar form of transaction as agreed by the parties to ultimately form the resulting issuer (the 'Resulting Issuer'). The final structure of the Transaction is subject to the receipt of tax, corporate and securities law advice for both Kismet and TDG Gold. Upon completion of the Transaction, the Resulting Issuer will carry on the business of TDG Gold.

Pursuant to the Transaction, holders of issued and outstanding TDG Gold Shares will receive 0.6667 (two thirds) KismetShares (the 'Pre-Consolidation Shares') for each TDG GoldShare (the 'Exchange Ratio') held by them.

It is expected that Kismet will effect a name change to 'TDG Gold Corp.' (the 'Name Change') upon the completion of the Transaction.

Closing of the Transaction will be subject to a number of conditions precedent, including, without limitation:

It is anticipated that the Resulting Issuer will qualify as a Tier 2 Mining Issuer pursuant to the requirements of the TSXV.

The Transaction is not a Non-Arm's Length Qualifying Transaction (as such term is defined in the policies of the TSXV) and consequently the Transaction will not be subject to approval by Kismet's shareholders. However, Kismet does plan to hold an annual general and special meeting of shareholders whereat, among other things, the shareholders of Kismet will be asked to approve certain matters including but not limited to the appointment of a new slate of directors.

As per the LOI, it is anticipated that prior to or concurrently with the closing of the Transaction, Kismet or TDG Gold, as the case may be, will complete a private placement (the 'Concurrent Equity Offering') of units (each, a 'Unit'), at a price per Unit to be determined in the context of the market, to raise gross proceeds of not less than $4,000,000.

Board of Directors and Management of the Resulting Issuer

In connection with the Transaction and pursuant to the requirements of the TSXV, Kismet will file on SEDAR (www.sedar.com) a filing statement (or an information circular in the event that the Transaction requires approval by the shareholders of Kismet) which will contain details regarding the Transaction, Kismet, TDG Gold and the Resulting Issuer.

Kismet intends to issue a subsequent press release in accordance with the policies of the TSXV providing further details in respect of the Transaction, including information relating to the transaction structure and descriptions of the proposed directors and Insiders (as such term is defined in the policies of the TSXV) of the Resulting Issuer, as well as the Concurrent Equity Offering. In addition, a summary of TDG Gold's financial information will be included in a subsequent news release.

Investors are cautioned that, except as disclosed in the management information circular or filing statement to be prepared in connection with the Transaction, any information release or received with respect to the Transaction may not be accurate or complete and should not be relied upon. Trading in the securities of a capital pool company should be considered highly speculative.

The TSX Venture Exchange Inc. has in no way passed upon the merits of the Transaction and has neither approved nor disapproved the contents of this press release.

This news release does not constitute an offer to sell or the solicitation of an offer to buy any securities in any jurisdiction.

David Hladky, P.Geo., a qualified person as defined by National Instrument 43-101 - Standards of Disclosure for Mineral Projects and Director of Kismet Resources Corp., has reviewed and approved the scientific and technical disclosure in this press release.

This news release contains certain forward-looking statements, including statements relating to the Transaction and certain terms and conditions thereof, the ability of the parties to complete the Transaction, the Consolidation, the Exchange Ratio, the Name Change, the Resulting Issuer's ability to qualify as a Tier 2 Mining issuer, the TSXV sponsorship requirements, the finding of a sponsor, shareholder, director and regulatory approvals, completion of the Concurrent Equity Offering, TDG Gold's acquisition of an interest in Oxide Peak, the completion of the Asset Acquisition by TDG Gold, future press releases and disclosure, and other statements that are not historical facts. Wherever possible, words such as 'may', 'will', 'should', 'could', 'expect', 'plan', 'intend', 'anticipate', 'believe', 'estimate', 'predict' or 'potential' or the negative or other variations of these words, or similar words or phrases, have been used to identify these forward-looking statements. These statements reflect management's current beliefs and are based on information currently available to management as at the date hereof.

ABU DHABI, UAE - A phone call by U.S. President Donald Trump clinched what is being described as an 'historic ...

The catastrophic blast which led to the deaths of more than 200 in Beirut on 4 August, has prompted more ...

PERTH, Western Australia - A 28-year-old man was scheduled to appear in Perth Magistrate's Court on Friday over allegations he ...

NEW YORK CITY, New York - A man who was arrested as he was about to board a plane at ...

BEIRUT, Lebanon - The World Food Programme (WFP) is racing to prevent food shortages in Lebanon as the country continues ...

Rush, but not race, to develop coronavirus vaccine

Mixed day on Wall Street, Dow the only gainer

NEW YORK, New York - U.S. stocks meandered in and out of positive territory on Friday and ended up with ...

Companies from China seek to list in U.S. despite trade tensions

SYDNEY, Australia - Stocks in Asia were on the rise on Friday, while the U.S. dollar was mixed. Only the ...

Fears mount over last weeks of Trump presidency if he loses

What could happen to America if Trump were to further, severely crash the U.S. economy the day after Joe Biden ...