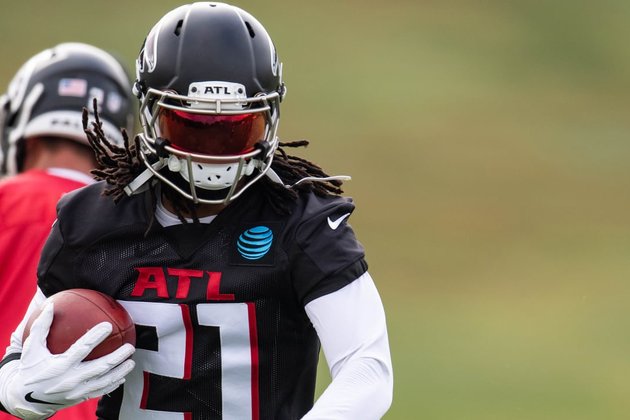 The Falcons held their first padded practice on Tuesday and two veterans, Todd Gurley and Alex Mack, were present on the field but not practicing. Mack and Gurley had a scheduled day off as coach Dan Quinn is monitoring their workloads.

When asked about limiting players ahead of practices, Quinn said they have a plan in place to make sure they're keeping the players fresh.

"There will be some players who have limited reps or an off day occasionally just to make sure [we] just keep hitting the markers of where we're at," Quinn said.

Mack, 34, has started every game for the Falcons in the last four seasons. The six-time Pro Bowler is the anchor of Atlanta's offensive line and the team relies on his presence in the middle.

Gurley, 26, is coming off a season in which his workload and production decreased with the Los Angeles Rams. Questions surrounding the health of the 2017 NFL Offensive Player of the Year's knee resurfaced after Gurley's trainer, Travelle Gaines, confirmed to CBS Sports there is an arthritic component to his knee.

The Falcons signed Gurley in hopes to ignite their run game which ranked 30th in the NFL in 2019. Gurley remains confident in his ability and is in great shape as he gets ready for his first season in Atlanta.

UK's Telegraph news block in Russia due to war coverage

MOSCOW, Russia: The UK newspaper, the Telegraph, has been blocked in Russia, following a request from the Russian prosecutor-general.The TASS ...

WASHINGTON, DC - U.S. President Joe Biden on Friday vowed to "do all in my power" to protect a woman's ...

PHNOM PENH, Cambodia: Cambodian villagers on the Mekong River have caught a stingray fish weighing 661 pounds, which is the ...

Northrop, Raytheon to build missile to shoot down hypersonic weapons

LONDON, England: According to a report in the UK's Guardian newspaper, a government advisory agency, the National Health Service Pay ...