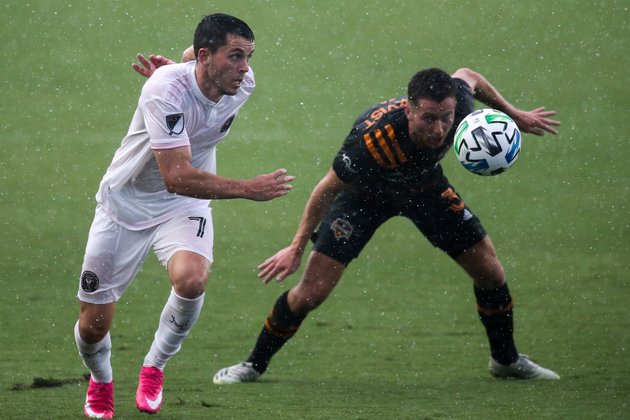 Expansion Inter Miami CF look to establish a franchise-record unbeaten streak on Saturday when they visit the Montreal Impact in Harrison, N.J.

With a 2-0-1 record over their last three games, Inter Miami (5-10-3, 18 points) can post their first four-match unbeaten streak with another positive result on Saturday.

Inter Miami are coming off a 1-1 draw with Atlanta United on Wednesday that left midfielder Wil Trapp "disappointed," considering his team outshot its adversary by a 21-3 margin.

"Every game we're approaching like a final," Trapp said. "We need to squeeze out every point we possibly can, home or away. That's why I think we're so disappointed in this (Atlanta) game, because we feel like we dropped two points."

Inter Miami's good form has brought them into the playoff race with five games remaining in the MLS schedule. Miami can cross the Eastern Conference playoff line with a victory Saturday, and also leapfrog the Impact (6-10-2, 20 points) in the standings.

Montreal is only 1-6-1 in its last eight games, including a 3-2 loss to the New England Revolution on Wednesday. The Impact did not recover after conceding two goals to the Revolution in the first 20 minutes of play.

"We weren't ready to compete or fight. There's no excuses," midfielder Shamit Shome told the Montreal Gazette. "We prepared well. We were optimistic going into this game. ... We came out flat. I don't know what it was. It's not good enough to start a game like that."

A roster thinned by injuries, international absences and other circumstances have led to the Impact's slump. Montreal parted ways with Saphir Taider in a transfer deal on Wednesday, and starting goalkeeper Clement Diop left the team Wednesday to deal with a family situation.

Luis Binks (caution accumulation) will also be unavailable for Montreal on Saturday. Fellow defender Rod Fanni is questionable after suffering a hamstring injury against New England.

Newly acquired Federico Higuain made his Inter Miami debut as a substitute against Atlanta. Juan Agudelo was also on the substitute bench after missing three games with a leg injury, and he could return on Saturday.

An outbreak of coronavirus in Ireland has been attributed to a flight from a country in the Middle East into ...

The U.S. space agency, NASA, reported Monday it has confirmed water can be found in sunlit areas of the moon, ...

America, damaged and divided, prepares to go to the polls

US President Donald Trump and his Democratic challenger Joe Biden are battling for the presidency of a deeply divided country, ...

RIVERSIDE, California - A U.S. man has been sentenced to twenty years in federal prison for conspiring to commit terrorist ...

SYDNEY, NSW, Australia - Stocks in Asia were relatively quiet on Tuesday compared to the volatility and substantive sell-offs on ...

UK needs to decide between bargaining power and negotiation strategy

LONDON, UK - Reaching an agreement in trade deals is, in the best of times, a long process. There are ...

SYDNEY, NSW, Australia - Stocks in Asia were limp on Monday, although the Hong Kong market showed some life.In Tokyo, ...