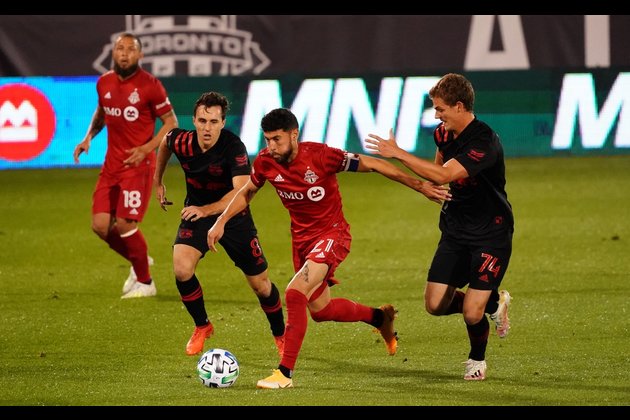 Toronto FC look to extend their unbeaten streak and their lead atop the league standings when they host Atlanta United on Sunday in East Hartford, Connecticut.

A 6-0-2 record over their last eight games has taken Toronto FC (11-2-5, 38 points) to the front of the Supporters' Shield race with five matches remaining in the regular season.

By contrast, Atlanta United (5-9-4, 19 points) are battling just to get into the playoffs. Atlanta is 0-1-2 over its past three games, with only one goal scored in that stretch.

That lone goal came Wednesday in Atlanta's 1-1 draw with Inter Miami. Jake Mulraney scored in the 83rd minute to steal a point for Atlanta United, who were outshot by a 21-3 margin.

Brek Shea had scored just three minutes earlier to give Miami the lead, which Atlanta interim head coach Stephen Glass felt was something of a wakeup call for his team.

"We need to take that approach from the start of the games and not wait till we get scored on," Glass said. "Maybe it was a sharp reminder in such a big game that we are capable of producing performances like that."

Both Toronto and Atlanta will be playing their fifth game in a span of 16 days, making Toronto FC's unbeaten run all the most impressive given the lack of recovery time.

"Everybody is just a little bit banged up and just a little bit tired," Toronto head coach Greg Vanney said. "So there's a real mentality aspect to this, and trying to come out and ... get on top of the game early if we can and try to play it out."

Vanney said there is a "very good chance" team captain Michael Bradley could return Sunday. Bradley has missed Toronto's past nine games due to a knee strain.

Glass said Friday that Atlanta United could have Marcelino Moreno, Ezequiel Barco and Franco Escobar available on Sunday. None of the three played against Inter Miami, and Barco has been out due to an undisclosed injury since Sept. 12.

This is the first meeting between Toronto FC and Atlanta United since last season's Eastern Conference final. Toronto recorded a 2-1 victory at Atlanta to advance to the MLS Cup final, which it lost 3-1 to the Seattle Sounders.