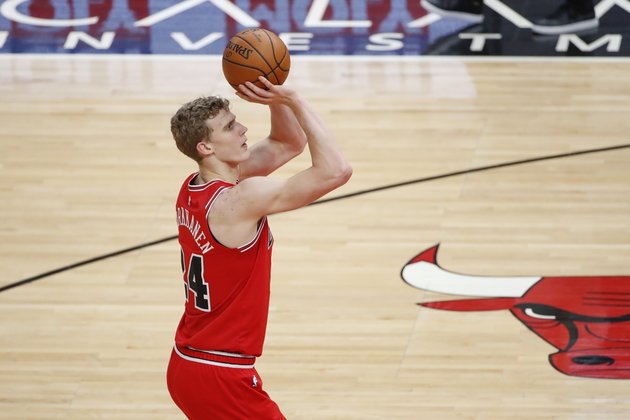 The James Wiseman whirlwind tour plays The Windy City on Sunday night when the Golden State Warriors and host Chicago Bulls each attempt to end winless starts to the NBA season.

Wiseman, the second pick of the November draft, has lived up to his high school clippings with 19 and 18 points in hisfirst two NBA games.

Only five players in Warriors history have begun a career with more than 37 points in their first two games, an impressive list topped by Wilt Chamberlain's 79 points in 1959.

Wiseman's start has been all the more impressive in that it's come on the road against two of the top teams in the Eastern Conference -- Brooklyn and Milwaukee.

And it's come after the consensus top player in the prep Class of 2019 got into just three college games at Memphis last season before quitting the team rather than sit out a lengthy suspension.

The 19-year-old has received little help from his new teammates, but that could change in Chicago, with Draymond Green a game-time decision after sitting out the 125-99 loss at Brooklyn and 138-99 defeat at Milwaukee with a strained right foot.

Green said Saturday that his foot feels good. His only concern is being a bit out of shape after missing most of training camp after a positive coronavirus test.

"Just got to get my wind back," he said before acknowledging that a pregame powwow with coach Steve Kerr and conditioning coach Rick Celebrini will determine his status for the Chicago game. "My body feels amazing. For the most part, I feel great."

The Warriors have been far worse defending 3-pointers than making them, having watched the Nets connect on 42.9 percent and then the Bucks 54.1 percent.

The latter took place on Saturday night, meaning the Bulls will have the unenviable task of dealing with a back-to-back on Sunday while the Warriors have enjoyed the last two days off.

The good news for Chicago: They've been home all season, while the Warriors have been on the road.

The Bulls' prize rookie, Patrick Williams, has had the advantage of tipping off his NBA career at home. He put on a nice show with 16 points in his debut against Atlanta, but then was held to nine by the Pacers.

The 19-year-old, who was taken two spots after Wiseman, realizes he's a work in progress.

"It's an experience that I'll never forget," he said of opening night. "I just have so much more to get better at, and as the season goes on, I'll get better."

The Bulls welcomed back Tomas Satoransky and Garrett Temple on Saturday after they'd been forced to sit out the opener due to COVID-19 concerns. The veterans combined for 12 points and 11 assists off the bench.

HOUSTON, Texas: On Monday, a Texas man, Lee Price III, was sentenced to over nine years in prison after fraudulently ...

WASHINGTON D.C.: Earlier this month, the federal Education Department announced it is canceling another round of student loan payments, adding ...

LONDON, England: The Taliban has executed dozens of members of the former government's security forces after the surrender of Afghanistan, ...

NATO chief: Countries should prepare for Russian incursion in Ukraine

RIGA, Latvia: Jens Stoltenberg, secretary-general of the North Atlantic Treaty Organization, has warned that the American-led military alliance should be ...

LONDON, England: British Airways has suspended flights to Hong Kong, after its crew members were reported to have been forced ...

NEW YORK, New York - U.S, stocks had a volatile day on Friday before all the major indices finished in ...

DUBLIN, Ireland: Industry officials have said that they do not expect large jumps in retail spending to be seen before ...

YOKOHAMA, Japan: The Covid Omicron variant of COVID-19 could add pressure to a chronic shortage of microchips used in car ...

SYDNEY, NSW, Australia - Stocks in Asia were mostly higher on Friday as investors and traders took emerging news about ...