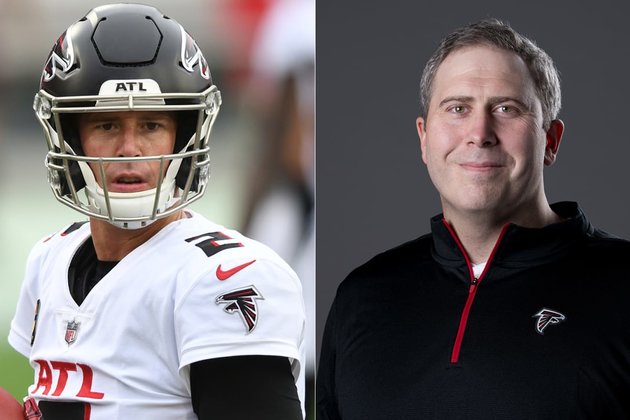 Arthur Smith has only been the Atlanta Falcons head coach for a couple of days and has lots of decisions to make in the coming days, weeks and months. But when it comes to what kind of team he wants to field in 2021, Smith didn't hesitate with his response.

"We want to be the most professional, unselfish, well-conditioned, toughest, physical football in the league," Smith said.

In an exclusive (and his first) interview with AtlantaFalcons.com, Smith said he certainly expects the roster to look different come September when the Falcons line up in Week 1, but he also points out that "we've got a lot of playmakers" now.

And one of those is quarterback Matt Ryan, who smith called "the ultimate pro."

Smith acknowledged the sustained success that Ryan has had here in Atlanta but paused when it came to comparing the work he did with Ryan Tannehill in Tennessee. Smith helped revive the Titans quarterback's career.

In two seasons running Smith's offense, the No. 8 overall draft pick in 2012 started 26 games and totaled 6,561 passing yards with 55 touchdowns, 13 interceptions and a 110.6 passer rating, while completing 67.3 percent of his passes. Tannehill was named to the Pro Bowl for the first time in his career in 2019 and was named the Comeback Player of the Year by both the Associated Press and the Pro Football Writers of America.

"(Matt) is a great leader and obviously there's a lot of things he can do, but I don't get into comparisons because we did something with Ryan," Smith said. "It doesn't mean we're going to do the same things with Matt.

In talking about the roster, Smith said that he and new Falcons general manager Terry Fontenot "will look to add more" playmakers as well as the kind of team he envisions building.

Along with the descriptors of tough, physical, smart, innovative and adaptiveness, another word used is "accountability."

"And that's going to be a big thing - we're going to look for guys that are great teammates and we're going to hold our best players accountable," Smith said. "And so whether that's Matt or Grady Jarrett, they are all going to be held to the same standard."

Smith said that he has spoken to Fontenot and has gotten to know him.

"We share the same vision," Smith said. "We have the same values. Certainly, it won't be groupthink, but Terry and I ... it will be an ultimate partnership. It will be a great collaboration, a good partnership as we look to build this team for the short term and the long term."