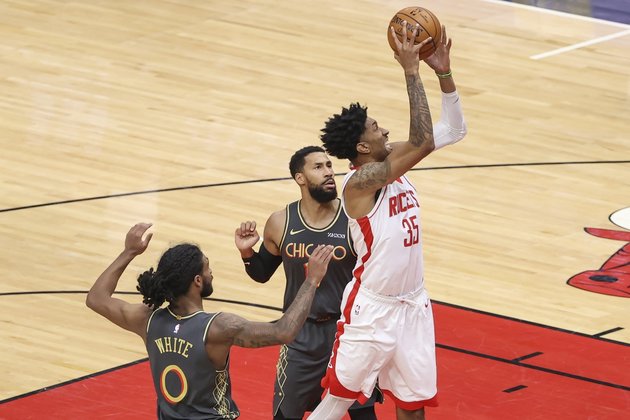 Stephen Silas would love to see how well the new-look Houston Rockets can play without James Harden.

But once again, the Rockets' first-year head coach won't get that chance with a full roster on Friday when the team travels to Detroit to face the Pistons.

Since the Rockets traded the disgruntled former Most Valuable Player to Brooklyn, they continue to deal with injuries and other issues.

John Wall is out until at least next week with knee soreness. Danuel House is on the league's health and safety protocol list.

In Houston's 109-103 loss to Phoenix on Wednesday, Christian Wood sprained his right ankle and P.J. Tucker sustained an abdominal injury.

Houston will seek to end a three-game losing streak while short-handed.

"We're dealing with a lot of different things, I guess," Silas said. "Mainly, without those guys, it's trying to stagger minutes and figure it all out while making sure that they're not playing 38 or 40 minutes."

Wood's status depends on how much his ankle swells up. He was injured in the second quarter but played through the pain during the second half. He finished with 20 points and 11 rebounds in 34 minutes.

"I was hurting the whole second half, but I felt like my team needed me, my team needed to win the game, so I have to sacrifice for my team," Wood said.

Wood doesn't want to miss the opportunity to face the team he played for last season. He enjoyed something of a breakout season with the Pistons, averaging 13.1 points and 6.3 rebounds, but Detroit didn't make a serious attempt to retain him. The Rockets obtained Wood in a sign-and-trade with the Pistons in November.

Victor Oladipo has been a bright spot. The top veteran player Houston acquired in the four-team blockbuster, Oladipo is averaging 27 points and 7.5 assists in his first two games with the club.

The Pistons are reeling from a fourth-quarter collapse at Atlanta on Wednesday. They were up by 17 points but the Hawks forced overtime with a 24-7 run. Atlanta then outscored Detroit in the extra session to steal a 123-115 victory.

"It stings," coach Dwane Casey said. "It hurts because the guys played their hearts out. We didn't play smart down the stretch. It's not from lack of competing. That's one thing these guys are doing. It hurts, but we're building callouses from this."

Jerami Grant has led the team in scoring 13 consecutive games, including a career-high 32 points against the Hawks.

"I've got to look at it, but it's not even conscionable to think he's driving that many times to the basket and not getting hit," Casey said.

Casey's club has the league's worst record at 3-11 but only one of those defeats was by double digits.

"We've got to take the pain and apply it in the right way," guard Wayne Ellington said. "Learn from it and keep on pushing."