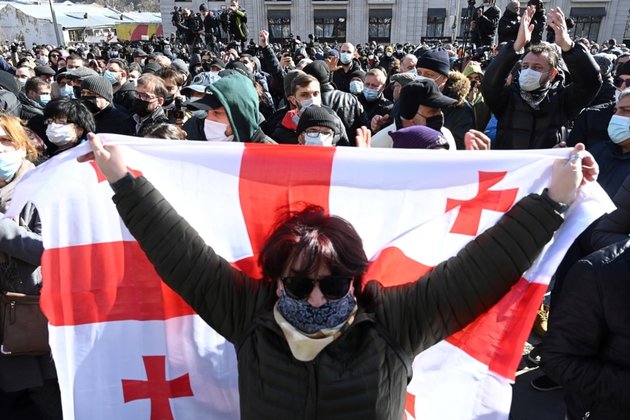 TBILISI -- Thousands of representatives of different opposition parties and civil rights activists are rallying in front of Georgia's government building, demanding the immediate release of an opposition leader Nika Melia, who was detained hours earlier when police stormed his party's offices.

The political scene in the Caucasus nation's has been on the brink of crisis since October elections that were dominated by the Georgian Dream party, but which independent monitors say were marred by irregularities.

The rally on February 23 started with the playing and singing of Georgia's national anthem. Opposition politicians then outlined their two major demands: Melia's immediate release and early parliamentary elections.

Melia, the leader of the major opposition party in the South Caucasus nation -- The United National Movement, was arrested in a dawn raid at the party's headquarters in Tbilisi.

More than a dozen people were injured as law enforcement raided the premises, spraying what appeared to be pepper spray into the offices where party leaders, as well as representatives of other opposition parties, had been shielding Melia for several days.

The arrest came days after Prime Minister Giorgi Gakharia resigned following a disagreement over whether to take the prominent politician into custody. Gakharia had said that Melia's arrest was unacceptable if it threatened to fuel political divisions in the Caucasus country of 3.7 million people.

Melia has been accused of inciting violence at street protests in June 2019, a charge he has dismissed as politically motivated.

SEE ALSO: Five Things To Know About Georgia And The Political Crisis It's Slipping Toward

A Tbilisi court last week ordered that he be taken into custody for allegedly failing to post bail. The Interior Ministry at the time announced it was delaying carrying out the order to detain Melia following the Gakharia's resignation.

Live television footage showed Melia being dragged from the party headquarters to be placed in pre-trial detention.

The U.S. Embassy in Tbilisi expressed concerns over Melia's arrest, saying 'We regret that the call of the United States and other international partners for restraint and dialogue was ignored.'

'We are dismayed by the polarizing rhetoric from Georgia's leadership at a time of crisis. Force and aggression are not the solution to resolving Georgia's political differences. Today, Georgia has moved backward on its path toward becoming a stronger democracy in the Euro-Atlantic family of nations,' an embassy statement said.

British ambassador Mark Clayton wrote on Twitter that he was 'shocked' by the scenes at the party's headquarters.

'Violence and chaos in Tbilisi are the last thing Georgia needs right now. I urge all sides to act with restraint, now and in the coming days,' he added.

Garibashvili and his proposed cabinet were supported by 89 deputies with two opposed in the 150-member parliament, where the ENM and smaller parties are boycotting proceedings.

With reporting by Reuters, Apsny, OC Media, Interpressnews, and AFP

LONDON, England: In a bid to reduce Covid infections among overweight Britons, Prime Minister Boris Johnson is promoting his own ...

VANCOUVER, Canada: Lawyers for Huawei chief financial officer Meng Wanzhou have sought a dismissal of the extradition case against her, ...

Iceland records 18,000 earthquakes in past week

REYKJAVIK, ICELAND - The volatile islands of Iceland have experienced unusual seismic activity in the past week, with over 18,000 ...

Yemen's Houthi rebels have carried out missile and drone strikes on a Saudi military base and an oil facility, expanding ...

BERLIN, Germany: In a change of policy, Germany has announced it will begin vaccinating those over 65 years-old, while recommending ...

WASHINGTON D.C.: Compromising with moderates, President Joe Biden and Democrats agreed to tighten the requirements for those eligible to receive ...

Brent at $67 per barrel, production to remain high at least till April

BANGALORE, India: Contrary to analysts' predictions, OPEC and its allies decided to leave oil production unaffected until April, citing the ...

Musk moves home to Texas, after locating companies throughout state

AUSTIN, Texas: Aviation and aerospace company SpaceX is expanding its presence to align with global demand by setting up a ...

Volvo said all car purchases to be only online

GOTHENBURG, Sweden: Volvo targets to only manufacture electric cars by 2030 by significantly increasing the size of its U.S. South ...

CUPERTINO, California: Apple announced on Monday that all 270 of its store locations in the U.S. have officially opened for ...