VANCOUVER, BC / ACCESSWIRE / July 20, 2021 / Metallic Minerals (TSX.V:MMG |OTCQB:MMNGF) ('Metallic Minerals', or the 'Company') is pleased to announce the start of the first phase of drilling of up to 2,000 meters at the La Plata silver-gold-copper project in southwest Colorado along with an update on exploration activities to date. This initial diamond core drill program is designed to test and confirm mineralization in the central porphyry system, which hosts an historical resource estimate, as the first steps toward developing a new NI 43-101 compliant resource estimate.

The La Plata district has a long and rich history of mining with the first silver deposits discovered in the 1700s by Spanish explorers. High-grade silver and gold production has been documented from the 1870s through the early 1940s from vein structures, replacement bodies and breccia zones at over 90 individual mines and prospects1. From the 1950s to 1970s, major miners including Rio Tinto (Bear Creek) and Freeport-McMoRan (Phelps Dodge) explored in the La Plata district focusing on the significant potential for bulk-tonnage disseminated and stockwork hosted mineralization2. Freeport-McMoRan retained ownership of claims in the district until 2002 when they sold their holdings to the current underlying vendors during the lows of the last metal price cycle.

A total of 54 drill holes totaling 14,400 m have been drilled on the property since the 1950s which confirm the presence of large-scale, multi-phase porphyry system with significant silver, gold and copper (see Table 1). This large-scale mineralized system is associated with a 10 km2 strongly magnetic signature with intense hydrothermal alteration.

Metallic Minerals is the first company to complete significant exploration on the La Plata project in nearly 50 years applying modern technologies and deposit modeling techniques. The Company sees the potential to rapidly extend the size of the known mineralized system and to identify and expand the higher-grade zones within the broader porphyry and epithermal mineralized zones.

Fieldwork completed by Metallic Minerals at La Plata to date has focused on resampling of drill core and underground sampling, surface mapping, and soil sampling. In addition, the Company has flown airborne resistivity and magnetics, completed a preliminary ground-based induced polarization survey and analysis of multi-spectral remote sensing data to establish mineralized anomalies and domains for the various styles of mineralization. This work has identified at least 25 anomalous targets within four broader target zones showing excellent potential to extend resources outside of the main historically recognized mineralized areas.

Drilling to date on the Allard zone within the central porphyry system has defined a northeast trending zone of copper-silver-gold mineralization that begins at surface and continues to a depth of at least 850 m and more than a kilometer of strike. Recent underground chip channel sampling by Metallic Minerals within the Allard tunnel has confirmed a true width of 98.2 m grading 0.55% Cu Eq. across the zone including 61.6 m grading 0.65% Cu Eq. Historical drill hole LP-03 intersected 395 m of porphyry style mineralization grading 0.57% copper equivalent (0.51% Cu, 6.3 g/t Ag, and 0.017 g/t Au) including 108 m grading 0.75% copper equivalent (0.65% Cu, 7.7 g/t Ag and 0.034 g/t Au) starting at surface with the hole ending in mineralization.

Copper Hill is one of several additional parallel zones of copper and precious metals mineralization have been intersected in drilling, located 1.5 km to the southeast of the Allard zone it is also associated with significant platinum and palladium mineralization. The Company completed systematic analyses of unsampled core from the Copper Hill target area which returned significant results in an area with little previous drilling. Two zones of copper and precious metals mineralization were encountered in this drilling with an upper zone grading 0.27% Cu Eq. over 207 m and a lower zone of mineralization grading 0.44% Cu Eq. over 44 m with associated gold, platinum, and palladium mineralization. The Copper Hill target area represents a significant platinum group element-enriched copper mineralized target more than a kilometer vertically below the high-grade surface mining at the Copper Hill prospect and is completely outside of the historic resource area. 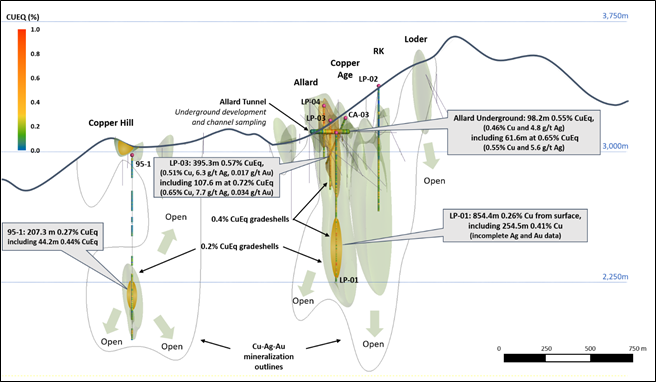 Greg Johnson, President and CEO of Metallic Minerals, stated, 'Metallic is the first company to complete significant exploration on the La Plata silver-gold-copper project in nearly 50 years and we are very excited to be kicking off this inaugural drill campaign. Our work to date has confirmed the multi-kilometer scale of the mineralized porphyry and epithermal system at La Plata through surface sampling, geophysics and satellite based remote sensing. This initial work has demonstrated the potential for the La Plata system to be much larger than previously recognized, with excellent potential to expand zones of known mineralization and to make new discoveries. We have begun 3D modelling of drilling and geophysical data with the objective of advancing towards a NI 43-101 compliant resource estimate for the project. We look forward to providing additional updates on drilling and modelling work in coming weeks and months at La Plata, as well as updates from our on-going work on the high-grade Keno Silver project and alluvial projects in the Klondike Gold district.'

Metallic Minerals will be presenting at the upcoming Green Energy and Precious Metals Investor Conference hosted by OTC Markets on July 29 at 2:30pm ET. Chairman & CEO, Greg Johnson, will provide a comprehensive overview of the Company, including an update on 2021 exploration activities to date and upcoming newsflow, followed by a Q&A. To register, click here.

Metallic Minerals Corp. is a growth-stage exploration company, focused on high-grade silver and gold projects in underexplored, brownfields mining districts of North America. Our objective is to create shareholder value through a systematic, entrepreneurial approach to exploration in the Keno Hill silver district, La Plata silver-gold-copper district, and Klondike gold district through new discoveries and advancing resources to development. Metallic Minerals has consolidated the second-largest land position in the historic Keno Hill silver district of Canada's Yukon Territory, directly adjacent to Alexco Resource Corp's operations, with nearly 300 million ounces of high-grade silver in past-production and current M&I resources. In addition, exploration at the recently acquired La Plata silver-gold-copper project in southwestern Colorado is targeting a silver and gold-enriched copper porphyry and adjacent high-grade silver and gold epithermal systems. The Company also continues to add new production royalty leases on its holdings in the Klondike gold district in the Yukon. All three districts have seen significant mineral production and have existing infrastructure, including power and road access. Metallic Minerals is led by a team with a track record of discovery and exploration success on several major precious and base metal deposits, as well as having large-scale development, permitting and project financing expertise.

About the Metallic Group of Companies

The Metallic Group is a collaboration of leading precious and base metals exploration companies, with a portfolio of large, brownfields assets in established mining districts adjacent to some of the industry's highest-grade producers of silver and gold, platinum and palladium, and copper. Member companies include Metallic Minerals in the Yukon's high-grade Keno Hill silver district and La Plata silver-gold-copper district of Colorado, Group Ten Metals in the Stillwater PGM-nickel-copper district of Montana, and Granite Creek Copper in the Yukon's Minto copper district. The founders and team members of the Metallic Group include highly successful explorationists formerly with some of the industry's leading explorer/developers and major producers. With this expertise, the companies are undertaking a systematic approach to exploration using new models and technologies to facilitate discoveries in these proven, but under-explored, mining districts. The Metallic Group is headquartered in Vancouver, BC, Canada, and its member companies are listed on the Toronto Venture, US OTC, and Frankfurt stock exchanges.

Forward Looking Statements: This news release includes certain statements that may be deemed 'forward-looking statements'. All statements in this release, other than statements of historical facts including, without limitation, statements regarding potential mineralization, historic production, estimation of mineral resources, the realization of mineral resource estimates, interpretation of prior exploration and potential exploration results, the timing and success of exploration activities generally, the timing and results of future resource estimates, permitting time lines, metal prices and currency exchange rates, availability of capital, government regulation of exploration operations, environmental risks, reclamation, title, and future plans and objectives of the company are forward-looking statements that involve various risks and uncertainties. Although Metallic Minerals believes the expectations expressed in such forward-looking statements are based on reasonable assumptions, such statements are not guarantees of future performance and actual results or developments may differ materially from those in the forward-looking statements. Forward-looking statements are based on a number of material factors and assumptions. Factors that could cause actual results to differ materially from those in forward-looking statements include failure to obtain necessary approvals, unsuccessful exploration results, changes in project parameters as plans continue to be refined, results of future resource estimates, future metal prices, availability of capital and financing on acceptable terms, general economic, market or business conditions, risks associated with regulatory changes, defects in title, availability of personnel, materials and equipment on a timely basis, accidents or equipment breakdowns, uninsured risks, delays in receiving government approvals, unanticipated environmental impacts on operations and costs to remedy same, and other exploration or other risks detailed herein and from time to time in the filings made by the companies with securities regulators. Readers are cautioned that mineral resources that are not mineral reserves do not have demonstrated economic viability. Mineral exploration and development of mines is an inherently risky business. Accordingly, the actual events may differ materially from those projected in the forward-looking statements. For more information on Group Ten and the risks and challenges of their businesses, investors should review their annual filings that are available at www.sedar.com

BERLIN, Germany: China and India missed a U.N. deadline to submit new plans detailing how they will reduce greenhouse gas ...

TUNIS, Tunisia: Some 394 migrants were rescued from an overcrowded wooden boat in the Mediterranean Sea on Sunday.The Sea-Watch 3 ...

MOSCOW, Russia: Staffs on Earth and in the International Space Station are working to correct a drop in air pressure, ...

WASHINGTON, D.C.: The United States added additional sanctions on the Cuban police force and its leaders on Friday, following the ...

Zoom to pay $85 mln due to sharing data, 'Zoombombing'

SAN JOSE, California: Zoom Video Communications has agreed to pay $85 million, along with improving its security, as a settlement ...

NEW YORK, New York - Wall Street bounded ahead on Tuesday with solid gains being recorded by all the major ...

San Francisco, California: Even as restaurants struggled to survive during the Covid lockdown in California, many fear they will not ...

SYDNEY, NSW, Australia - Stocks in Asia weakened on Tuesday, with the damage registering. across the board.In China, the Shanghai ...

WASHINGTON D.C.: The cost of labor in the United States rose significantly in Q2 as firms increased salaries and offered ...