VANCOUVER, BC / ACCESSWIRE / July 20, 2021 / Group Ten Metals Inc. (TSXV:PGE)(OTCQB:PGEZF)(FSE:5D32) (the 'Company' or 'Group Ten') announces the arrival of the second drill rig at the Company's flagship Stillwater West platinum group element, nickel, copper, cobalt, and gold ('PGE-Ni-Cu-Co + Au') project in Montana, USA, and provides an update on progress of the planned 10,000 meter 2021 drill campaign. Drilling is now underway in the Chrome Mountain target area (see Figure 1), and a second rig will be installed in the Camp target area this week.

The primary objective of the 2021 program is: 1) the expansion of existing drill-defined kilometer-scale nickel and copper sulphide mineralization, enriched in palladium, platinum, rhodium, gold and cobalt, at the advanced Chrome Mountain, Camp and Iron Mountain target areas; and 2) step-out testing of adjacent priority targets identified in the 2020 Induced Polarization ('IP') survey (see Figure 2 and April 19, 2021 news release). In addition, an expanded IP geophysical survey, mapping and prospecting programs are planned as part of this season's program, with the aim of advancing earlier-stage targets to drill-ready status across Stillwater West's 32-kilometer strike length.

Michael Rowley, President and CEO, commented, 'We are very pleased to have initiated our most extensive drill campaign to date at Stillwater West, and to be accelerating advancement of the project towards its potential to become a major source of low-carbon battery, green, and precious metals in a premier US mining district. The 2021 campaign will focus on the most advanced target areas with the objective of expanding the initial resource estimates that are now in progress with release targeted for this summer. Our work to date, combined with the large, productive, and metal-rich nature of the district, highlights the terrific scale and expansion potential of the Stillwater West project. We look forward to further announcements in the near term.' 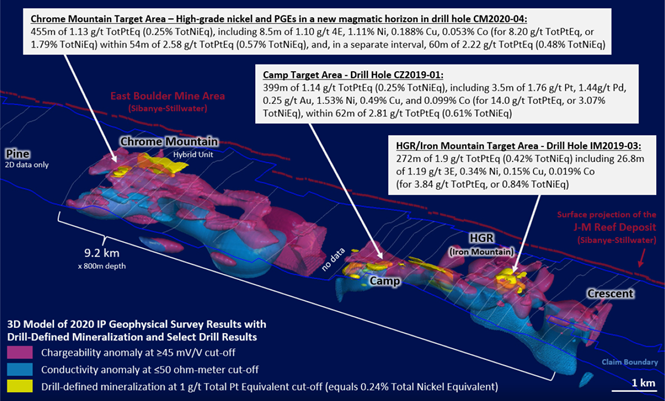 Group Ten is rapidly advancing the Stillwater West PGE-Ni-Cu-Co + Au project towards becoming a world-class source of low-carbon, sulphide-hosted nickel, copper, and cobalt, critical to the electrification movement, as well as key catalytic metals including platinum, palladium and rhodium used in catalytic converters, fuel cells, and the production of green hydrogen. Stillwater West positions Group Ten as the second-largest landholder in the Stillwater Complex, with a 100%-owned position adjoining and adjacent to Sibanye-Stillwater PGE mines in south-central Montana, USA1. The Stillwater Complex is recognized as one of the top regions in the world for PGE-Ni-Cu-Co mineralization, alongside the Bushveld Complex and Great Dyke in southern Africa, which are similar layered intrusions. The J-M Reef, and other PGE-enriched sulphide horizons in the Stillwater Complex, share many similarities with the highly prolific Merensky and UG2 Reefs in the Bushveld Complex. Group Ten's work in the lower Stillwater Complex has demonstrated the presence of large-scale disseminated and high-sulphide battery metals and PGE mineralization, similar to the Platreef in the Bushveld Complex2. Drill campaigns by the Company, complemented by a substantial historic drill database, are driving 3D models of Platreef-style mineralization in the five most advanced target areas, three of which are expected to become formal mineral resources by mid-2021. Multiple earlier-stage Platreef-style and reef-type targets are being advanced across the rest of the 32-kilometer length of the project based on strong correlations seen in soil and rock geochemistry, geophysical surveys, geologic mapping, and drilling.

About the Metallic Group of Companies

The Metallic Group is a collaboration of leading precious and base metals exploration companies, with a portfolio of large, brownfield assets in established mining districts adjacent to some of the industry's highest-grade producers of silver and gold, platinum and palladium, and copper. Member companies include Metallic Minerals in the Yukon's high-grade Keno Hill silver district and La Plata silver-gold-copper district of Colorado, Group Ten Metals in the Stillwater PGM-nickel-copper district of Montana, and Granite Creek Copper in the Yukon's Minto copper district. The founders and team members of the Metallic Group include highly successful explorationists formerly with some of the industry's leading explorers/developers and major producers. With this expertise, the companies are undertaking a systematic approach to exploration using new models and technologies to facilitate discoveries in these proven, but under-explored, mining districts. The Metallic Group is headquartered in Vancouver, BC, Canada, and its member companies are listed on the Toronto Venture, US OTC, and Frankfurt stock exchanges.

Forward Looking Statements: This news release includes certain statements that may be deemed 'forward-looking statements'. All statements in this release, other than statements of historical facts including, without limitation, statements regarding potential mineralization, historic production, estimation of mineral resources, the realization of mineral resource estimates, interpretation of prior exploration and potential exploration results, the timing and success of exploration activities generally, the timing of the timing and results of future resource estimates, permitting time lines, metal prices and currency exchange rates, availability of capital, government regulation of exploration operations, environmental risks, reclamation, titlefuture driling actiivities and the locations of such drilling, and future plans and objectives of the company are forward-looking statements that involve various risks and uncertainties. Although Group Ten believes the expectations expressed in such forward-looking statements are based on reasonable assumptions, such statements are not guarantees of future performance and actual results or developments may differ materially from those in the forward-looking statements. Forward-looking statements are based on a number of material factors and assumptions. Factors that could cause actual results to differ materially from those in forward-looking statements include failure to obtain necessary approvals, unsuccessful exploration results, changes in project parameters as plans continue to be refined, results of future resource estimates, future metal prices, availability of capital and financing on acceptable terms, general economic, market or business conditions, risks associated with regulatory changes, defects in title, availability of personnel, materials and equipment on a timely basis, accidents or equipment breakdowns, uninsured risks, delays in receiving government approvals, unanticipated environmental impacts on operations and costs to remedy same, and other exploration or other risks detailed herein and from time to time in the filings made by the companies with securities regulators. Readers are cautioned that mineral resources that are not mineral reserves do not have demonstrated economic viability. Mineral exploration and development of mines is an inherently risky business. Accordingly, the actual events may differ materially from those projected in the forward-looking statements. For more information on Group Ten and the risks and challenges of their businesses, investors should review their annual filings that are available at www.sedar.com.

PALESTINIAN TERRITORIES - A 20-year old Palestinian youth was shot dead by Israeli army soldiers on Thursday as he attended ...

WASHINGTON, D.C.: Due to the spread of the Covid Delta variant, the United States will not lift the existing travel ...

Blinken meets representative of Tibet government in exile in India

NEW DELHI, India: China is expected to deliver an angry response to a meeting U.S. Secretary of State Antony Blinken ...

HONG KONG: Hong Kong has convicted the first person for terrorism and inciting secession, as defined by its new national ...

Palestinian boy, 12, dies after being shot by Israeli troops

PALESTINIAN TERRITORIES - A 12-year old Palestinian boy has been shot dead by Israeli army soldiers in the West Bank, ...

SYDNEY, NSW, Australia - Hundreds of Australian Army soldiers are to be deployed to the streets of Sydney in a ...

NEW YORK, New York - U.S. stocks fell across the board on Friday with Amazon a stand-out for sellers. The ...

Amazon says it will not accept bitcoin for online payments

SEATTLE, Washington: Amazon.com denied media reports on July 26 that the company was considering accepting bitcoins as a form of ...

SANTA CLARA, California: Hoping to regain its lead by 2025 and catch up to rivals, such as Taiwan Semiconductor Manufacturing ...

SYDNEY, NSW, Australia - There was wholesale selling of stocks on Asian markets on Friday with the technology sector coming ...

WASHINGTON, D.C.: New home sales fell to a 14-month low in June, while sales in May were weaker than initially ...