LOS ANGELES, CA / ACCESSWIRE / October 14, 2021 / Cinedigm (NASDAQ:CIDM), the leading independent streaming company super-serving enthusiast fan bases, announced today that the Company has re-launched its popular subscription-based streaming service Screambox. In addition to getting a killer new look and branding, the service will see wider distribution via Cinedigm's broad digital footprint and expansive list of distribution partners. As part of the relaunch, the Company has migrated the channel from the former Vimeo platform to Cinedigm's proprietary Matchpoint Blueprint framework. This allows the Company to expand the channel's catalog of film and episodic titles more quickly and efficiently, providing the opportunity to significantly scale its programming. In addition, the updated app will give horror enthusiasts the ability to stream both linear and live events. This much broader selection of content from the Company's catalog of horror titles will allow viewers to stream and scream to their heart's content. 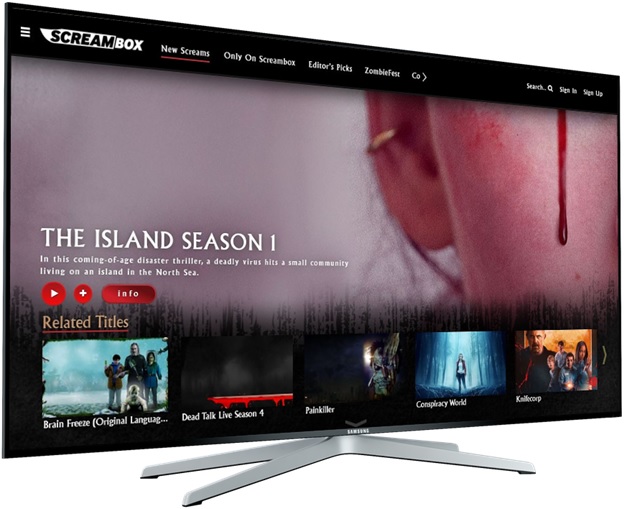 Screambox, which was named 'The Perfect Horror Streaming Alternative to Netflix' by Tech Times, features a broad mix of content for casual and die-hard horror fans alike. The service is refreshed monthly with content from the Company's extensive genre library with films and episodes delivering every type of terror imaginable - Supernatural, Slashers, Zombies and more.

The re-launch comes on the heels of Cinedigm's recent acquisition of Bloody Disgusting, a name that has become synonymous with the horror genre itself covering film, television and more. As part of the acquisition, the Bloody Disgusting team will be managing the Screambox subscription-based service going forward. This includes leaning into their long-standing reputation as tastemakers in the genre to curate content within the streaming channel. As an additional added value, the Bloody Disgusting TV channel will also be featured within the new Screambox.

In celebration of the re-launch of Screambox, new subscribers to Screambox will be given the opportunity to redeem a free collectible NFT trading card as a welcome gift. In addition, a series of original Bloody Disgusting-branded NFT trading cards will be sold at auction.

All in, the Bloody Disgusting Media Brand reaches more than 30 million unique horror fans annually across its website, the Bloody Disgusting podcast network, the BD app and via their social footprint. Last year, Cinedigm partnered with the company to create the popular ad-supported streaming channel Bloody Disgusting TV. Now Screambox and Bloody Disgusting TV will allow Cinedigm to offer fans the quintessential streaming screamfest with subscription-based (SVOD), ad-supported (AVOD) and FAST linear options. In addition to streaming their favorite movie, horror fans have access to a network of podcasts as well as the ability to learn about their favorite movie or actor while interacting with fellow horror enthusiasts on the website.

Cinedigm also continues to aggressively acquire new original content to bolster the channel's catalog of Exclusives and Digital Premieres. Knifecorp, starring horror icon Kane Hodder, slashed its way into homes this past September as a Screambox Exclusive. The highly anticipated 8-part original series The Island will transport audiences to a disease-ridden island off the coast of Europe this October. The show, which according to DW Akademie 'blurs the line between pandemic fantasy and reality,' centers around the spread of a deadly virus that ravages a remote island in the North Sea as the inhabitants fight to survive the catastrophe.Cinedigm also recently acquired Brain Freeze, the zom-com favorite that opened this year's Fantasia International Film Festival. Its premiere on Friday, August 13th made it one of the channel's most-watched films and showed that Cinedigm's recent acquisitions are already a hit with viewers.

'The acquisition of Screambox allows us to leverage our proprietary technology to better manage and operate the channel at scale,' said Tony Huidor, Cinedigm's Chief Technology & Product Officer. 'With the addition of Screambox to our channel portfolio along with our growing investments in the horror genre, we have an opportunity to reach a loyal fanbase of horror fans and solidify our position as a leader in the horror genre within the OTT space.'

An innovator in the digital transformation of the entertainment industry for more than two decades, the deal continues Cinedigm's core mission to entertain the world by building the world's best portfolio of enthusiast channels and services for the streaming generation. Through a diverse mix of premium SVOD services and dedicated AVOD and FAST channels, Cinedigm's streaming portfolio reaches indie film (Fandor), horror (Screambox & Bloody Disgusting) and family entertainment (Dove Channel), as well as dedicated channels for iconic entertainers, led by Bob Ross (The Bob Ross Channel) and soon Elvis Presley (The Elvis Presley Channel). Cinedigm's ultimate goal is to build destinations that immerse viewers in content they love while staying at the forefront of technology as the streaming industry continues to evolve.

ABOUT  CINEDIGM
For more than twenty years, Cinedigm (NASDAQ:CIDM) has led the digital transformation of the entertainment industry. Today, Cinedigm entertains hundreds of millions of consumers around the globe by providing premium content, streaming channels and technology services to the world's largest media, technology and retail companies. For more information, visit http://www.cinedigm.com/.

UK to return to Nigeria statue taken in 1897

LONDON, England: A bronze rooster, taken from what is now Nigeria by British troops in 1897, will be returned to ...

NEW YORK CITY, New York: Shares of Virgin Galactic fell up to 20 percent after the company announced that it ...