TORONTO, ON / ACCESSWIRE / October 14, 2021 / E2Gold Inc. (TSXV:ETU) (the 'Company' or 'E2Gold') is pleased to announce that it has entered into an agreement with Golden Share Resources Corporation (TSXV:GSH) ('Golden Share') who has granted an option to E2Gold to earn a 100% interest in the Band-Ore property (the 'Property' or 'Band-Ore'). The Property is located west of Thunder Bay, Ontario and hosts two historic high-grade gold resources (the resources are not considered National Instrument 43-101 compliant, nor is the Company treating them as such).1

Dr. Eric Owens, CEO and President, stated, 'The Band-Ore property is in an excellent jurisdiction, shares a regional shear zone with Hemlo, and has strong growth potential, as it has been underexplored for forty years.' Dr. Owens added, 'Our focus remains on the Hawkins Gold Project, but this acquisition fits perfectly with our growing Ontario property portfolio, and it has minimal upfront financial commitment.' 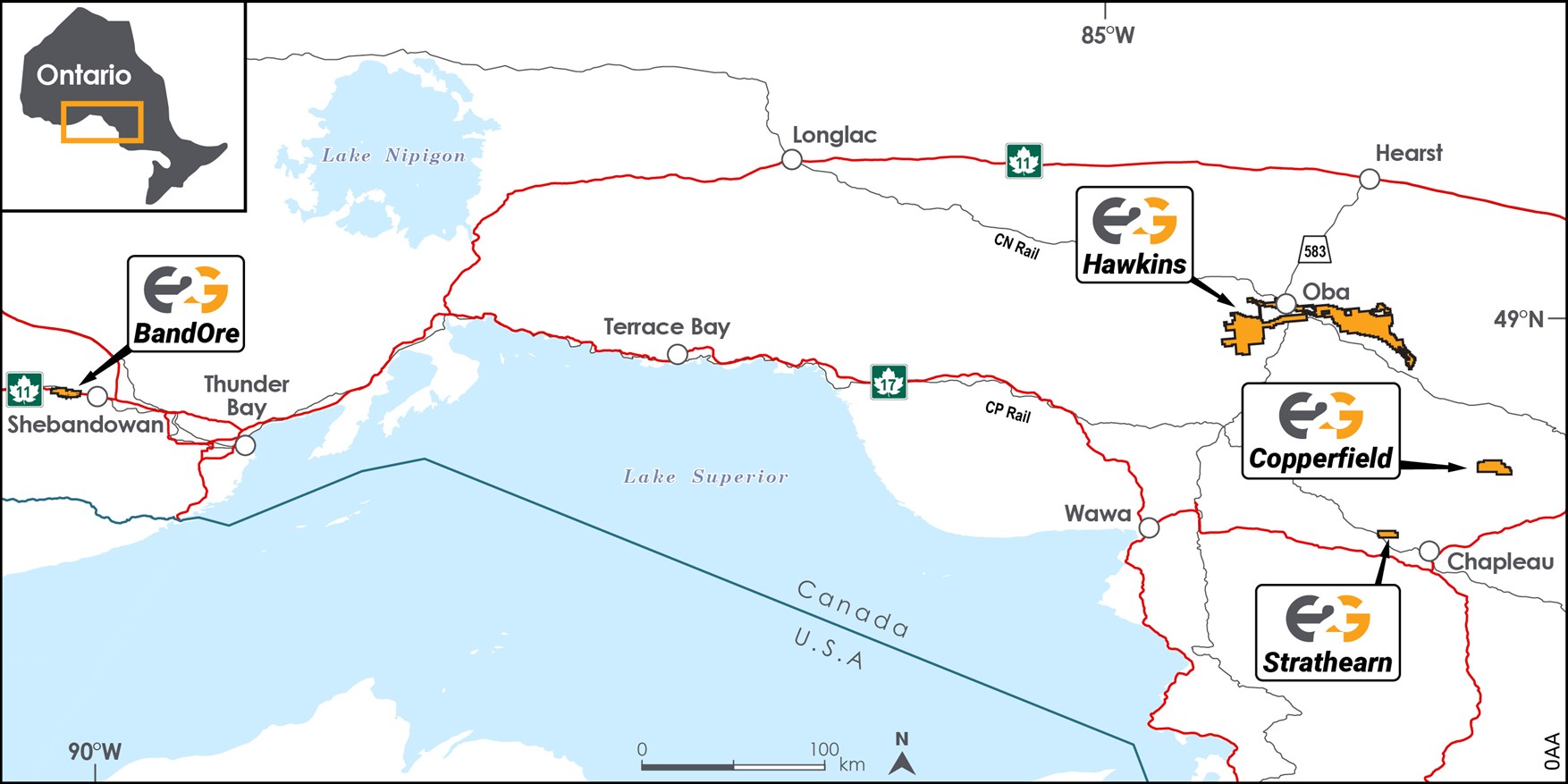 Nick Zeng, CEO of Golden Share, commented, 'We are pleased to have this opportunity to work with Dr. Eric Owens and his team at E2Gold. Band-Ore has great potential but requires a methodical and modern geologic look, which I have confidence E2Gold will provide'.

The 10 km long property, located some 75 km west of Thunder Bay, is comprised of 16 patented mining claims, one leased mining claim, and 109 staked mining claims in Hagey and Conacher Townships of Ontario. Both the Main Zone and the No. 4 Zone are open at depth and along strike.

Figure 2: Bedrock geology and outline of the Band-Ore property. 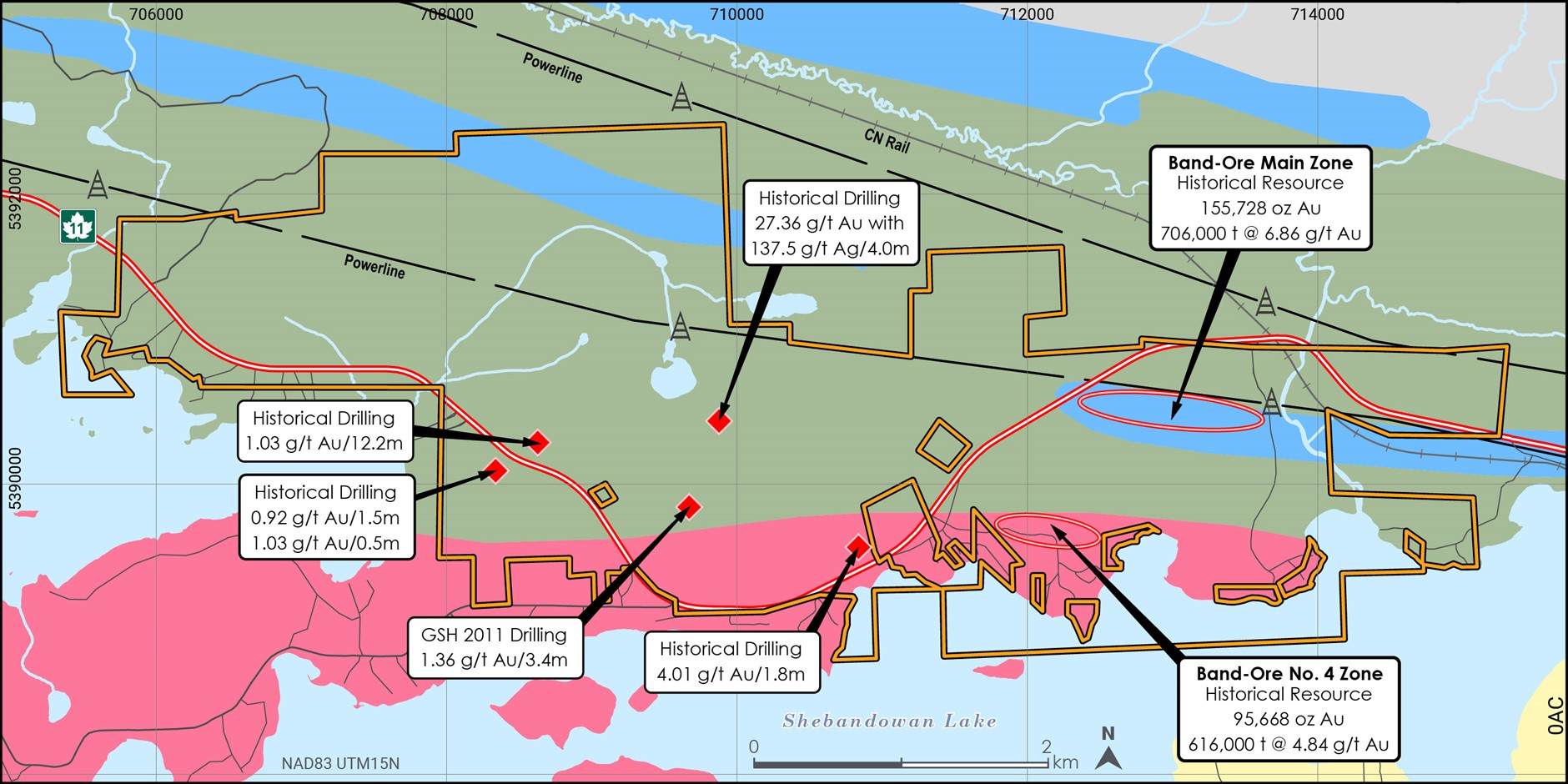 Agreement Details: In order to acquire its interest in the Property, the Company is required to make aggregate cash payments to Golden Share in the amount of $2,000,000 according to the table below:

In a separate unrelated matter, E2Gold will issue 29,070 common shares (the 'Finder's Shares') with a deemed aggregate value of $5,000 to a consultant in consideration for services rendered in connection with the staking of the Copperfield and Strathearn properties, Ontario. The issuance of the Finder's Shares remains subject to the approval of the TSX Venture Exchange.

Qualified Persons: Eric Owens, Ph.D., P.Geo. and Dr. Natalie Pietrzak-Renaud act as the Qualified Persons for E2Gold, and have reviewed the content of this press release.

E2Gold Inc. is a Canadian gold exploration company with a focus on Its large, 75 km long flagship property, the Hawkins Gold Project, which covers seven townships in north-central Ontario, about 140 km east of the Hemlo Gold Mine. The Company is currently aggressively drilling the second half of a 10,000 metre 2021 drill program to confirm and expand the McKinnon Inferred Resource. E2Gold is commited to increasing shareholder value through the development of all targets at Hawkins and future potential of the Band-Ore property.

Note 1: The Band-Ore mineral resource estimates are considered to be ‘historical' in nature and are not compliant with National Instrument 43-101. Neither Golden Share nor E2Gold have done sufficient work to classify the historical estimates as current mineral resources or mineral reserves in accordance with NI 43-101, however the data is relevant as it is indicative of potential mineralization on the Property. The Band-Ore Main Zone historical resource comes from the Report on Shebandowan Property Conacher Township Thunder Bay Mining Division Ontario for Band-Ore Resources Ltd., effective date February 15, 2006 with lead author David Gunning, which references the following reports: Report on Property of Band-Ore Gold Mines Ltd., Thunder Bay, Ontario, with lead author J.S. Crosscombe, Mining Engineer, effective date May 15, 1947. The Band-Ore No. 4 Zone historical resource comes from 1982 Diamond Drilling Report and Pre-Evaluation Study on the Band-Ore Option Conacher Township Ontario for Mattagami Lake Exploration Ltd. with lead author Karl J. Huska, December 1982.

All scientific and technical information contained in this press release was prepared under the supervision of Eric Owens, the President and Chief Executive Officer of the Company and a 'qualified person' within the meaning of National Instrument 43-101.

Forward Looking Statements - Certain information set forth in this news release may contain forward-looking statements that involve substantial known and unknown risks and uncertainties, including the risk that the acquisition of the Property may not be completed on the terms currently proposed or at all, receipt of applicable regulatory approvals, and the prospective nature of the Property. These forward-looking statements are subject to numerous risks and uncertainties, certain of which are beyond the control of E2Gold, including with respect to the results of exploration activities and the receipt of all regulatory approvals. Readers are cautioned that the assumptions used in the preparation of such information, although considered reasonable at the time of preparation, may prove to be imprecise and, as such, undue reliance should not be placed on forward-looking statements.

Bangladesh to move 81,000 Rohingya to island after UN deal

DHAKA, Bangladesh - Bangladesh intends to transfer more than 80,000 Rohingya refugees to a distant island in the Bay of ...