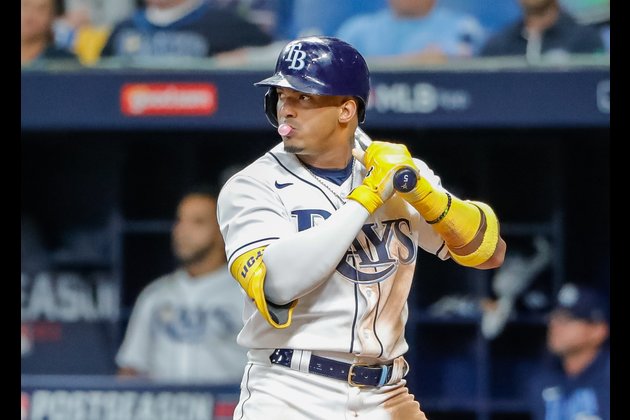 Tampa Bay Rays shortstop Wander Franco has agreed to a 12-year contract that guarantees him approximately $185 million and has a maximum value of $223 million, ESPN reported on Tuesday.

Franco, 20, made a smashing debut after being called up from Triple-A Durham in June. He batted .288 with 30 extra-base hits, 39 RBIs and 53 runs scored in 70 games, finishing third in the American League's Rookie of the Year voting.

Franco reached base safely in 43 consecutive games from July 25 to Sept. 29, tying Hall of Famer Frank Robinson's record for the longest streak in MLB history by a player 20 years old or younger.

Franco's extension would be the largest ever for a player with less than one year of service in the majors, topping Ronald Acuna Jr.'s eight-year, $100 million deal with the Atlanta Braves in April 2019.

It would also be the largest contract in Rays' history, surpassing the six-year, $100 million extension awarded to third baseman Evan Longoria after the 2012 season.

Tampa Bay originally signed Franco, a native of the Dominican Republic, at age 16 for a $3.825 million bonus in July 2017.

HOUSTON, Texas: On Monday, a Texas man, Lee Price III, was sentenced to over nine years in prison after fraudulently ...

WASHINGTON D.C.: Earlier this month, the federal Education Department announced it is canceling another round of student loan payments, adding ...

LONDON, England: The Taliban has executed dozens of members of the former government's security forces after the surrender of Afghanistan, ...

NATO chief: Countries should prepare for Russian incursion in Ukraine

RIGA, Latvia: Jens Stoltenberg, secretary-general of the North Atlantic Treaty Organization, has warned that the American-led military alliance should be ...

LONDON, England: British Airways has suspended flights to Hong Kong, after its crew members were reported to have been forced ...

NEW YORK, New York - U.S, stocks had a volatile day on Friday before all the major indices finished in ...

DUBLIN, Ireland: Industry officials have said that they do not expect large jumps in retail spending to be seen before ...

YOKOHAMA, Japan: The Covid Omicron variant of COVID-19 could add pressure to a chronic shortage of microchips used in car ...

SYDNEY, NSW, Australia - Stocks in Asia were mostly higher on Friday as investors and traders took emerging news about ...