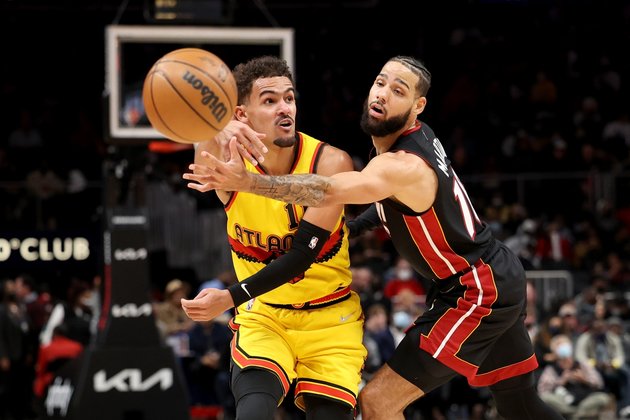 The Miami Heat can push their winning streak to four games as they arrive home for the first time in 17 days to host the Atlanta Hawks on Friday.

The Heat went 4-2 on the lengthy road trip and won the final three games, including Wednesday's 115-91 decision over the Hawks. The success has come despite being extremely short-handed; six players were on the inactive list Wednesday.

"We've been living in a world and a profession right now where there has just been an inordinate amount of moving parts and our guys have just handled it really well," Miami coach Erik Spoelstra said. "I give them a lot of credit."

Leading scorer Jimmy Butler, who average 23.2 points, could return on Friday. He has missed three games with a right ankle sprain. The illnesses and injuries have forced the Heat to lean on their bench and reserves Tyler Herro and Duncan Robinson have responded. Herro led the team with 21 on Wednesday and Robinson had 14, including three 3-pointers.

"I think what this team has learned to do is just continue to find a way to win with different lineups and different people out," Robinson said.

The Heat did a good job neutralizing Atlanta's Trae Young, who ranks third in the NBA with 27.7 points. Caleb Marin was assigned the task of staying in front of the smaller Young and helped limit him to 15 points, which matched his second-lowest total of the season. Young scored 50 against the Heat on Feb. 20, 2020.

Miami has won eight of its last 10 and is third in the Eastern Conference at the midway point. Atlanta is headed in the opposite direction, losing seven of its last 10 and dropping six games under .500 and below the playoff line.

"There is still a lot of season left, so we just take it one game at a time and try to win games," said Atlanta coach Nate McMillan, who returned to the bench after missing time in the health and safety protocol. "We know that the more games we drop, the deeper that hole gets for us. There are a lot of games left. There's time, but we need to start taking care of business here."

The Hawks suffered through a painful scoring drought on Wednesday, as the Heat opened the second half on a 16-0 run to put the game on cruise control.

"I thought we did a good job in the first quarter defending them. We did have a lead and won the first quarter," McMillan said. "But you've got to sustain that. It's a 48-minute game and we were just not able to do that. Their second unit came in and continued to keep pressing on our defense."

Atlanta forward De'Andre Hunter returned Wednesday. Hunter previously played in a game Nov. 12 and was sidelined by a right wrist injury. He is considered the team's best defensive player and he returned to score 15 points in 24 minutes. The Hawks are still without Clint Capela, who remains doubtful with an ankle sprain.

Multiple outlets reported Thursday that the Hawks were trading Cam Reddish to the New York Knicks in exchange for Kevin Knox.

The Hawks and Heat meet for the second time on Friday and play again on Jan. 21 in Atlanta.

Would a new Cold War be in the best interest of the United States?

As China unleashed live-fire military exercises off the coast of Taiwan, simulating a real "reunification by force" operation in the ...

NAYPYIDAW, Myanmar - According to a legal official, a court in Myanmar has sentenced former leader Aung San Suu Kyi ...

BEIJING, China: Following a meeting between their foreign ministers, China and Nepal have agreed to build the Trans-Himalayan Multi-Dimensional Connectivity ...

SACRAMENTO, California: California Governor Gavin Newsom is proposing to give a $1.4 billion government loan to extend the life of ...

NEW DELHI, India: A government order released to reporters this week said New Delhi will continue to enforce a mask ...

U.,S. stocks back on the defensive, Nasdaq drops 164 points

Thailand to spend $62 billion to build industry in east

BANGKOK, Thailand: Thailand seeks to invest $61.97 billion in its industrial eastern region over the next five years, in a ...

JEDDAH, Saudi Arabia: In a Twitter post published this week, Saudi Arabia's Kingdom Holding said it had invested in Russian ...

Asian stocks rally across the board, Nikkei 225 surges 354 points

DHAKA, Bangladesh A preliminary investigation into the tragic crane accident that killed five people in Uttara on Monday has found ...

HANOI, Vietnam: The Vietnamese government is considering building a high-speed railway, with a possible cost of up to $58.7 billion, ...