Taylor-Made Takes: 'We're Not Surprised To Be Here' 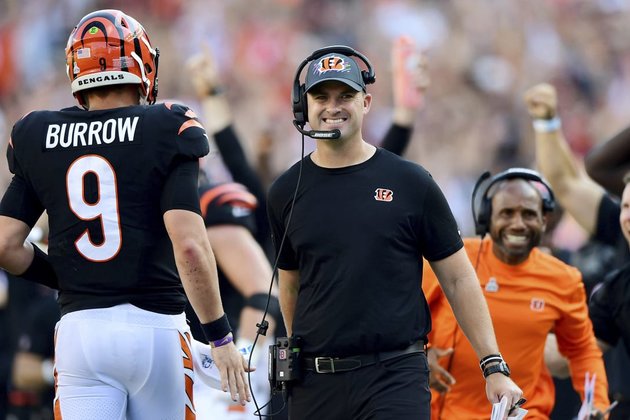 As he prepared to make his NFL postseason debut as head coach of the Bengals in Saturday's Wild Card Game (4:30 p.m.-Cincinnati's Channel 5) at Paul Brown Stadium against the Raiders, Zac Taylor huddled with Bengals.com senior writer Geoff Hobson for their weekly conversation.

GH: Heading into your first playoff game, have you consulted with playoff coaches you've worked for and with, like Sean McVay and Matt LaFleur?

ZT: This week doesn't feel any different than the previous games. It's the Raiders. We've played them before. We've played a lot of good teams recently. We just have to prepare to be at our best on Saturday.

I think one thing that is special about this team is that we've played some big games over the course of the season, but they've never really felt big the way the players acted. What I mean by that is they didn't act uptight and make mistakes because they were nervous. This team has been really loose and done a great job with that. They're confident in how they prepare. It's going to serve us well.

GH: There were some games I guess you came out sluggish, but not tight.

ZT: We certainly haven't been perfect, but I never felt over the course of a week or pregame that I thought, man, these guys weren't ready to go or they were uptight. I never felt that. There's the confidence they know they put in the work and let the chips fall where they may. We've had some tough performances at times. I don't look at them and say, "Guys weren't focused at practice, they didn't meet the right way." They put in the work. You're not always perfect, but at the end of the day you're happy with what you put in and just go out there and put your best foot forward.

GH: I think it says a lot about the guys you've brought in. A dozen guys on the roster for Saturday have been in a playoff game for other teams. They've been there before.

ZT: I've been telling you all along that we belong in the playoffs. We're not surprised to be here. We're not going to be floored by being here. We're confident. We're going to prepare the right way. Be ready to go.

GH: The Raiders game back on Nov. 21 was such a huge turning point. They had the same record and you were coming off two losses and the bye.

ZT: It was a big game. We could use that momentum at that point in the season. Coming off the bye. Road game. We needed that jolt going forward, especially going into the Pittsburgh game. I thought our players responded really well. Coming off the bye, they weren't feeling any pressure like some teams feel if you've lost two games in a row or maybe we felt in the past. It's just a different team this year.

GH: Like you said, it was bloody. If I remember correctly, this is the game you called during the week and told them, 'This is how it's going to go. We're going to pound and pound and the dam will break.'

ZT: We always talk about what type of game it's going to be. It can change certainly over the course of the season based on where you're at, where the other team is at. We played these guys eight games ago. A lot has changed since then. Both teams have evolved. It will be a brand new game.

GH: In the end though, Gus Bradley is the Raiders defensive coordinator. Gus is going to be Gus. He's going to play what he's going to play. The longest ball you completed on him was 17 yards. I imagine they want to play the same type of game.

ZT: They take great pride in not giving up explosive plays. I think they've got a really sound defense. Gus has a tremendous amount of experience calling defensive plays in this league and managing games. It's always a tough test whenever you play one of his defenses.

GH: How different will they be? How have they evolved in two months?

ZT: Very similar personnel when we played against them the last time. We thought it was a really good defense when we played them and they've played really well the last four weeks. I would imagine that their confidence is really high right now.

GH: Joe did a great job with being patient in that game. You've been in playoff games coaching quarterbacks. As a quarterback, is patience at a premium or does it hurt you?

ZT: I think Joe is straight up going to play his style of game. He does a great job of getting a sense during the week what type of game it's going to be. What is going to be asked of him. Over the course of the game I think he always makes a good adjustment to the flow of the game and what we need him to do. I'm excited to see him perform.

GH: At some point somebody is going to take the long ball away from you again. There's nobody in the league hotter than Joe.

GH: You haven't had to run the ball lately. Can you turn that on overnight and give it to Joe Mixon 30 times like you did in Vegas?

ZT: Every play is going to be different on exactly how we want to attack a team and what we feel their strengths and weaknesses are and where we're at. We've got all the confidence in the world in Joe Mixon and our offensive linemen to be really good in the run game and that's part of the process we're going through early in the week trying to determine what that plan is going to look like.

GH: When you walked out of the building in Atlanta after coaching in the Super Bowl with the Rams on the way to taking the job in Cincinnati, what did you take away from that game? Maybe something you wrote in your journal?

ZT: There was a lot to process there. I'm not sure I ever fully decompressed from the Super Bowl. You go from one of the more difficult moments you experience to one of the greatest in 12 hours. I don't know that I ever fully processed that full moment or will I ever be able to.

GH: I just remember being stunned you guys scored only three points. It was a classic playoff game to me. Tight. Points hard to come by. Just like the Raiders and Chargers the other night, although there were more points. But it was always in doubt. Classic ebbs and flows.

ZT: You just have to hang in there. Whether you've got the lead or you're behind, you just have to hang in there. Not panic. We've done a great job with that this year. Building a lead and maintaining a lead and being behind 24-0 and grinding our way back in at 24-22. And then the Kansas City game. We were down 14 points multiple times. The guys learned from experience that we're never out of it and if we've got a lead we've got to really put the clamps down and hold that lead. We've played a lot of different styles of game this year and learned from all of them.

GH: What are the three things you have to do to advance?

ZT: I don't think it's any different than the regular season. You have to win the turnover battle and you have to be efficient in the critical situations. Short yardage. Goal line. Third downs. It's no different now than it has been all year. Those are things we've always harped on and our players have done a good job managing them and they're going to have to continue to do that this Saturday.