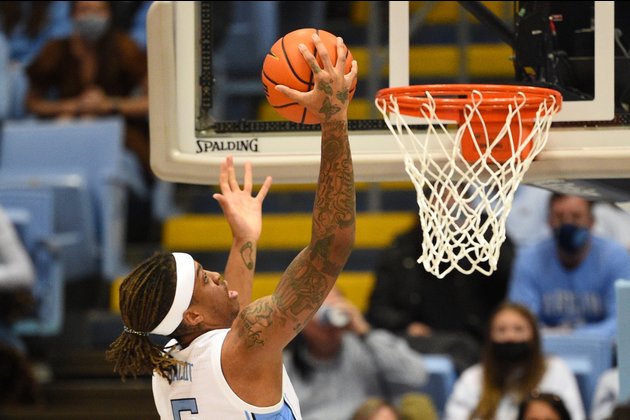 After playing three games over a span of seven days, North Carolina will be a full week between games when the Tar Heels host Georgia Tech in an Atlantic Coast Conference rematch Saturday night in Chapel Hill, N.C.

Coach Hubert Davis gave his Heels a day off "to get their breath" after their performance against the Cavaliers. It was their third win in four outings since getting demolished 98-69 by Kentucky before Christmas.

"It is a much-needed rest for them," Davis said.

The Heels got a big performance out of Armando Bacot, who recorded career highs of 29 points and 22 rebounds against the Cavaliers. Bacot was 12 of 18 from the field and had only one turnover in logging 38 minutes.

Paster went with a small lineup, starting 6-foot-6 Deebo Coleman at the "5" spot in place of 6-foot-8 Jordan Meka, and with Tristan Maxwell (22 points, 7 of 11 on 3-pointers) lighting it up, the Jackets hit more than half their field-goal attempts (29 of 57) for the first time since late November.

"Our defense has been good for us this year," Pastner said, "but we haven't been able to score enough to win."

Going small helped produced what Pastner called more "bursts" offensively. The win was just their third time scoring in the 80s and first since beating Charleston Southern 85-70 in November.

"Our pace was better, our speed was better," Pastner said. "That was a big deal."

Would a new Cold War be in the best interest of the United States?

As China unleashed live-fire military exercises off the coast of Taiwan, simulating a real "reunification by force" operation in the ...

NAYPYIDAW, Myanmar - According to a legal official, a court in Myanmar has sentenced former leader Aung San Suu Kyi ...

BEIJING, China: Following a meeting between their foreign ministers, China and Nepal have agreed to build the Trans-Himalayan Multi-Dimensional Connectivity ...

SACRAMENTO, California: California Governor Gavin Newsom is proposing to give a $1.4 billion government loan to extend the life of ...

NEW DELHI, India: A government order released to reporters this week said New Delhi will continue to enforce a mask ...

Thailand to spend $62 billion to build industry in east

BANGKOK, Thailand: Thailand seeks to invest $61.97 billion in its industrial eastern region over the next five years, in a ...

JEDDAH, Saudi Arabia: In a Twitter post published this week, Saudi Arabia's Kingdom Holding said it had invested in Russian ...

Asian stocks rally across the board, Nikkei 225 surges 354 points

DHAKA, Bangladesh A preliminary investigation into the tragic crane accident that killed five people in Uttara on Monday has found ...

HANOI, Vietnam: The Vietnamese government is considering building a high-speed railway, with a possible cost of up to $58.7 billion, ...

NEW YORK, New York - Stocks were decidedly mixed in the U.S. on Tuesday as investors struggled to make a ...