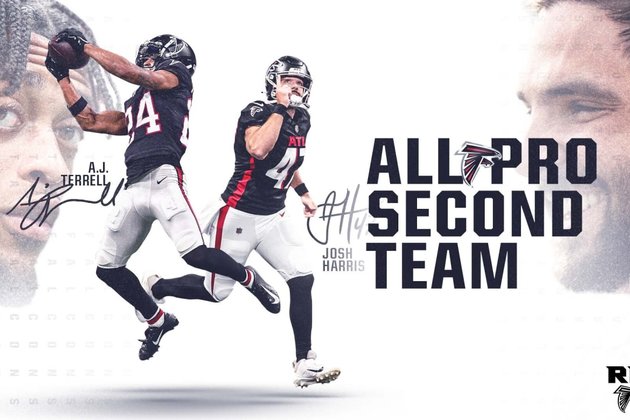 Falcons cornerback A.J. Terrell and long snapper Josh Harris were named as second-team All-Pros in a Friday announcement by the Associated Press.

That's a massive honor for both players, who join an exclusive club recognized for their performance. This an NFL-wide honor, not a conference split like the Pro Bowl, voted upon by a panel of 50 national media members.

'There are still challenges here': Breaking down the Falcons salary cap heading into 2022 offseason Why Terry Fontenot and Arthur Smith are committed to collaboration entering pivotal Falcons offseason Bair Mail: On Grady Jarrett's future, Matt Ryan and protecting him, the salary cap and NFL Draft strategy Kyle Pitts nominated for rookie of the year award decided by fans

This is the second individual honor for Harris, who was also named to the initial Pro Bowl roster and will represent the NFC in the Feb. 6 all-star game in Las Vegas.

Terrell isn't currently schedule with him after a massive snub where he was named a fourth alternate (?!?) for the conference.

Being a second-team All-Pro falls more in line with the excellent season he had, where he led the NFL in several statistical categories and was recognized as a shutdown cornerback during a breakout season.

Up Next Videos Kyle Pitts' top plays | Best of 2021 Videos 2021 season recap | A strong foundation has been built  Videos Top Falcons defensive plays | Best of 2021  Videos Best of mic'd up: Offense | Best of 2021 Videos Cordarrelle Patterson's top plays | Best of 2021 Videos What's ahead for Falcons Free Agency & NFL Draft | Falcons Audible Podcast Videos Breaking down the Falcons' pass rush against the New Orleans Saints | Film Review  Videos TOP 10 highlights from the 2021 season | Best of 2021 Videos Terry Fontenot and Arthur Smith's end of season press conference Videos Cordarrelle Patterson on football still being 'a kids game'  Videos Kyle Pitts recaps his rookie season and speaks on the future  Videos What happens next after 2021 season ends with loss to Saints Videos Matt Ryan recaps the loss to the Saints and looking into the future Videos Falcons vs Saints highlights | Week 18 Videos Grady Jarrett on it being 'too early to be speaking on next year' Videos Arthur Smith speaks to the media following the loss to the New Orleans Saints Videos Atlanta's final stand against division rivals | Saints vs. Falcons hype Videos Richie Grant reflects on his rookie year and what he's learned Videos Grady Jarrett on 'Controlling what's guaranteed' Videos Dean Pees on how every player he's coached is his 'favorite player'  Videos Dave Ragone on how the offense 'evolved' throughout the season Videos Marquice Williams on how 'We keep a small menu, big understanding' Videos Darren Hall reflects on his rookie season in the NFL Videos 'Grady was a guy that I was watching in college' | Ta'Quon Graham press conference Videos Matt Ryan on Sunday's rivalry game against the New Orleans Saints Videos 'You need division rivalries... You want people to be excited about a game' | Arthur Smith press conference Videos 'I'm going to say as many cuss words as I can' | Lee Smith Micd Up Videos Look ahead at the Atlanta Falcons vs New Orleans Saints season finale | Falcons Audible Podcast Videos Season ticket members help paint field for gameday Videos Arthur Smith on 'playing to win this game' on Sunday Videos How Falcons can grow, learn from loss to Bills Videos Sideline Access: Best highlights from Falcons vs. Bills  Videos Duron Harmon recaps his second quarter interception against the Bills Videos Parker Hesse on going in and stepping up for the team Videos Foyesade Oluokun speaks to the media following the Bills game Videos Matt Ryan on not taking advantage of opportunities  Videos Arthur Smith addresses the media following the loss to the Bills  Videos A.J. Terrell speaks to the media following the loss to the Bills Videos Sideline Access: A.J. Terrell comes up with a diving interception Videos Highlight: Foye Oluokun intercepts the Josh Allen for the Falcons' third pick of the game