Knicks beat Hawks for third win in a row 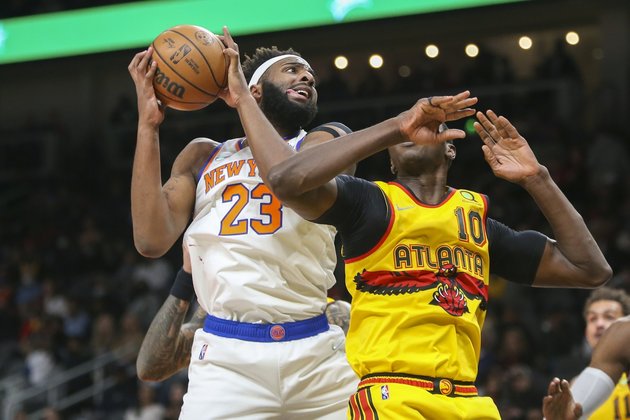 R.J. Barrett and Julius Randle combined to score 50 points, and the visiting New York Knicks rolled to their third straight win, 117-108 over the Atlanta Hawks on Saturday night.

Barrett, coming off back-to-back games of 30-plus points, scored 26 with five rebounds on Saturday. Randle was 10-for-21 from the floor and finished with 24 points, nine assists and six rebounds.

It was the third time the Knicks have beaten the Hawks this season, earning them the tiebreaker advantage if they wind up tied at the end of the season. The Knicks have won six straight regular-season games against Atlanta.

The Knicks, who entered the game 27th in the league in field-goal percentage (43.6), took advantage of numerous open looks and made 50.8 percent of their shots.

The Hawks were led by Trae Young with 29 points and five assists and Danilo Gallinari with 17 points. Onyeka Okongwu had 12 points, five rebounds and two blocks.

The Hawks have lost five straight games, and their record at home dropped to 8-11.

The first quarter was tight, with New York holding a 31-28 lead at the end of the period. But the Knicks began to pull away midway through the second quarter, with Randle scoring 10 straight as New York stretched its lead to 65-51 at halftime.

New York led by 17 in the third quarter, only to be held to 20 points in the quarter. That allowed the Hawks to cut the lead to 85-77 on Gallinari's 3-pointer with 2.7 seconds left.

Atlanta's second unit outscored the Knicks 14-3, including a 9-0 stretch, and cut the lead to 93-91 on a Lou Williams 3-pointer with 7:26 left. But the Knicks, sparked by Fournier's eight points, went on a 20-9 run to turn away the challenge.

Both teams will play Monday on Martin Luther King Jr. Day. The Hawks will host the Milwaukee Bucks, while the Knicks will begin a four-game homestand against the Charlotte Hornets.