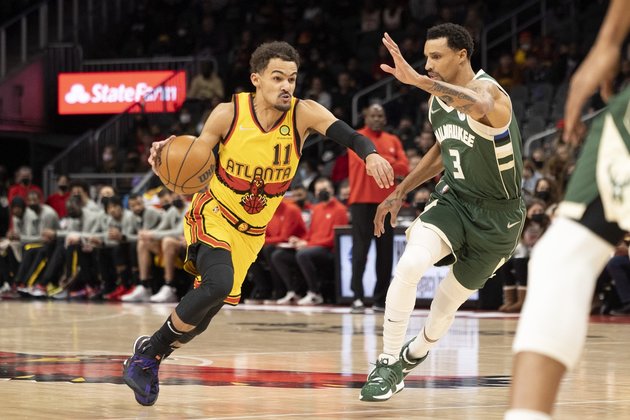 Trae Young scored 15 of his 30 points in the fourth quarter to spark the Atlanta Hawks to a 121-114 win over the visiting Milwaukee Bucks and snap a five-game losing streak.

The Hawks had not won at home since beating Oklahoma City on Nov. 22.

Atlanta's De'Andre Hunter added 20 points and nine rebounds and John Collins had 16 points, 12 rebounds and three blocks. Gallinari scored 16 off the bench and drew a crucial charge against Giannis Antetokounmpo in the final minute. Young finished with 11 assists.

Atlanta has won both meetings between the clubs, who played in the Eastern Conference final last season. They meet for the final time March 9 in Milwaukee.

The Bucks took advantage of Atlanta's poor shooting in the first quarter -- the Hawks shot 31.8 percent from the field -- and led 26-17. Atlanta got as close as four points when Collins drained a 3-pointer to cut the lead to 48-44 with 4:42 left in the second quarter, but the Bucks used a 14-4 run to regain control and led 62-50 at the break. Middleton had 15 and Antetokounmpo scored 14 for the Bucks in the first half.

The Hawks got to within three points and trailed 88-83 after three quarters, only to have the Bucks go on a 9-0 run early in the fourth quarter to stretch the lead to 11.

The Bucks were playing without Jrue Holiday for the sixth straight game because of left ankle soreness. The Hawks were missing Clint Capela (left ankle sprain) for the fifth straight and Bogdan Bogdanovic (right knee soreness) for the second game.