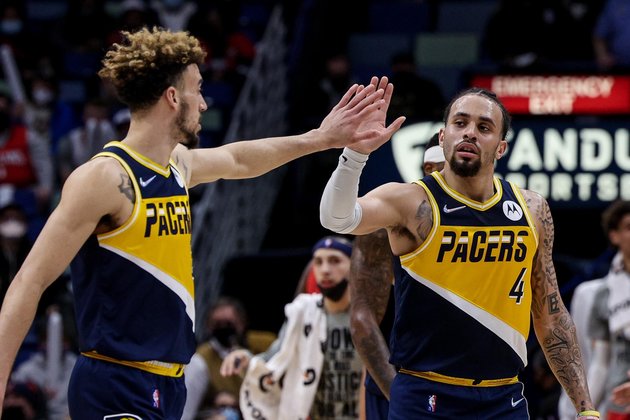 The Indiana Pacers can't seem to string together enough wins to make a steady climb in the standings.

They've had to do much of their recent work on the road, so a home game could provide a boost when they take on the Charlotte Hornets on Wednesday night at Indianapolis.

Indiana went 2-3 on its just-concluded, five-game road trip, falling 117-113 on Monday night to the New Orleans Pelicans. The Wednesday home contest vs. Charlotte is merely a stopover, as the Pacers' next two games will be on the road.

"Overall, the trip had a lot of positives," Pacers coach Rick Carlisle said. "I love the spirit we played with on this trip. We need to bring that home on Wednesday."

The Hornets have dropped two games in a row, including a 125-113 road loss to the Toronto Raptors on Tuesday.

"Not enough effort, not enough urgency," Charlotte coach James Borrego said. "We got to correct that."

Still, there has been something different to address just about every game for Indiana.

Carlisle said the Pacers tried a smaller lineup at times in an attempt to cut off drives into the lane. He said he's not normally prone to go to a "small-ball" approach.

Duane Washington Jr. made seven 3-pointers to post a Pacers single-game rookie record in the New Orleans game. He finished with 21 points in his 16th career game.

"You kind of know where your shot is going to come from, and I'm still learning every day," Washington said. "I'm not sure what game this is for me, so just continuing to put good days together."

The Pacers need those types of boosts.

"Duane Washington is always ready," Carlisle said. "He's done a lot of good things recently. He can shoot the ball. He knows how to play the game. He brings energy, and his presence on the floor creates a real positive vibe."

The Hornets are halfway through their first set of games on back-to-back days since losing Jan. 2 and Jan. 3 to the Phoenix Suns and the Washington Wizards. They have gone 0-2 three times and 1-1 five times in back-to-backs this season.

Charlotte had a season-low four 3-pointers on Sunday in a 113-91 home loss to the Atlanta Hawks. The Hornets struggled again from long range on Tuesday night, going 10-for-31.

Charlotte forward Gordon Hayward missed the past two games due to a sore right foot.

"Other guys have to step up," Borrego said. "That's the bottom line. Everybody wants minutes. Here's your opportunity."

A game in Indianapolis holds significance for Hayward, who was a college standout at Butler.

Charlotte is 3-0 against the Pacers this season, with the wins coming by one, three and eight points.

China lashes US for change on website supporting Taiwan independence

BEIJING, China: China's Foreign Ministry rebuked the U.S. for changing the wording about Taiwan on the State Department website, stressing ...

VATICAN CITY: While recovering from knee problems that have forced him to use a wheelchair last week, Pope Francis announced ...

It's not politics but Holy War for me: Imran Khan

SIALKOT, Pakistan - Pakistan Tehreek-e-Insaf (PTI) Chairman Imran Khan has claimed that a plot to kill him was being hatched, ...

Report: Germany has taken in over 700,000 refugees from Ukraine

US pressured by airlines to lift Covid testing requirements

WASHINGTON D.C.: The U.S. airline industry is pressuring the Biden administration to lift a 16-month-old regulation requiring a negative COVID-19 ...

NEW DELHI, India: Tesla made known this week that it will not sell electric automobiles in India due to the ...

KATHMANDU, Nepal - The governments of Nepal and India have signed a bilateral memorandum of understanding for the construction of ...

Kia reports second most electric car sales in US, Ford close behind

LOS ANGELES, California: Kia has become the second largest manufacturer of electric vehicles sold in the United States, second only ...