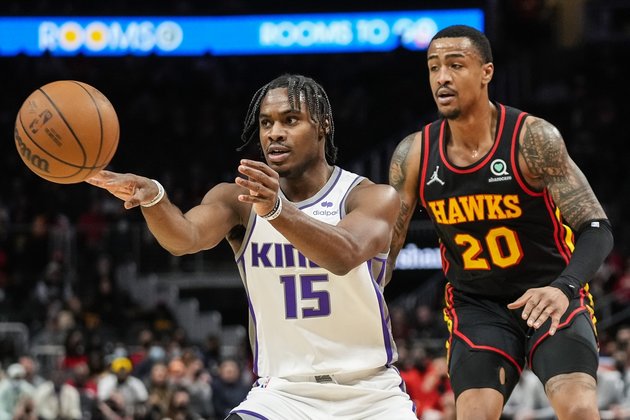 Playing home for the fifth time in their last six games, and having had the two previous days off, the Hawks exploded for 46 points in the second quarter against a Kings club that had flown into town early in the morning after a similar-sized blowout loss at Boston on Tuesday.

Returning from a five-day absence due to a sore right knee, Bogdanovic shot 6-for-11 overall and 3-for-8 on 3-pointers, helping the Hawks win their fifth straight game.

Harrison Barnes had a game-high 28 points and rookie Davion Mitchell, starting in place of injured De'Aaron Fox, chipped in with 20 for Sacramento, which has opened a five-game trip with three consecutive losses and now heads to Philadelphia for a game on Saturday.

Seeking to end a four-game losing streak, the Kings used an early 11-0 flurry to go up 25-13 in the eighth minute of the game. Barnes had seven of his 28 points in the run.

The margin remained at 12 at period's end, but Atlanta was even at 42-all by the 7:20 mark of the second period and then began its run-away, scoring the final 13 points of the half to go up 67-50. Young had the last five points in the run.

The Hawks achieved their largest lead at 90-60 midway through the third period en route to their second consecutive one-sided win, having rolled 113-91 at Charlotte on Sunday.

Young completed a double-double with a game-high 10 assists and also found time for four steals for the Hawks, while Lou Williams went for 15 points off the bench.

In sweeping the two-game season series, the Hawks outshot the visitors 53.3 percent to 41.9 percent.

Tyrese Haliburton had 11 points to complement a team-high seven assists, while Richaun Holmes totaled 12 points for Sacramento, which allowed 118 or more points for the fifth consecutive game.

Each team made 12 3-pointers, with Mitchell connecting on a game-high four on nine attempts.

MOSCOW, Russia: According to preliminary data released by the finance ministry this week, almost three months after Moscow's invasion of ...

KUALA LUMPUR, Malaysia: After China's decision to not host the 2023 Asian Cup, a choice for a new host will ...

Strong support for Taiwan to attend WHO meeting this week

GENEVA, Switzerland: The World Health Organization (WHO) has received a proposal by 13 member states requesting that Taiwan be allowed ...

BRUSSELS, Belgium: European Union foreign policy chief Josep Borrell has said that the bloc would ensure Ukraine that it has ...

Former U.S. President George W. Bush has made an embarrassing mistake in criticizing Russian President Vladimir Putin over his decision ...

WASHINGTON D.C.: The U.S. State Department has announced the launch of a new program to capture and analyze evidence of ...

Target reports profits down 52%, shares down 25%

MINNEAPOLIS, Minnesota: Amidst the rising costs of essentials, such as fuel and food, and the rapid return by consumers to ...

WASHINGTON D.C.: After its U.S. asset management unit pleaded guilty to criminal securities fraud after the collapse of a group ...

SACRAMENTO, California: In another blow to the state's push to diversify corporate leadership, a California court judge has ruled that ...

KATHMANDU, Nepal - According to the World Organization for Animal Health (OIE), Nepal has reported its first cases of African ...