Phillies need to get struggling offense going vs. Reds 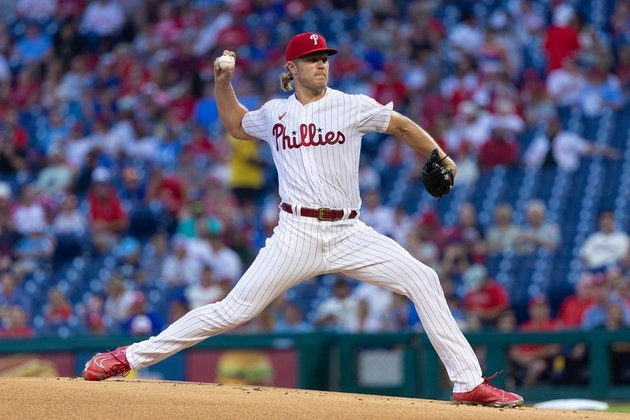 The Philadelphia Phillies hope a change of scenery will awaken their slumbering bats when they open a three-game road series against the Cincinnati Reds on Monday night.

After averaging 5.9 runs while winning 12 of 13 to move into a favorable position in the National League wild-card race, the Phillies have been shut out three of their last four games, including their last two by the New York Mets.

Philadelphia has totaled two runs in those four games, but they were enough to win the series opener in New York 2-1 on Friday before suffering 1-0 and 6-0 losses over the weekend.

The Phillies won't have injured star Bryce Harper for the series as he continues his rehabilitation schedule in an attempt to return from a broken thumb. Philadelphia manager Rob Thomson did announce Sunday that Harper will take batting practice on the field Monday for the first time since suffering the injury on June 25.

"It's getting there," the skipper reported. "He's making progress. It's good. Getting him on the field is huge."

After dealing with Jacob deGrom and Chris Bassitt the last two days, the Phillies would seem to have the pitching advantage Monday when they send right-hander Noah Syndergaard (6-8, 3.96 ERA) against Reds veteran lefty Mike Minor (1-9, 6.24).

Syndergaard has never lost to the Reds in his career, going 5-0 with a 2.11 ERA in six starts. The Reds haven't seen him since he threw a complete-game shutout against them, allowing four hits and striking out 10, in a 1-0 Mets win in May 2019.

The 29-year-old is 1-0 with a 4.91 ERA in two starts since joining the Phillies from the Los Angeles Angels at the trade deadline. The Phillies have won both his starts, including his most recent, when he held Miami to two runs in six innings in a 4-3 win last Wednesday.

Syndergaard will see a Reds team potentially recharged after getting multiple-hit games from six players in an 8-5 home victory over the Chicago Cubs on Sunday. The win snapped a five-game losing streak that included a 4-2 defeat in the Field of Dreams matchup with the Cubs in Iowa on Thursday.

Joey Votto went 0-for-5 in what was otherwise a memorable day; he became the Canadian-born player with the most games in major league history. Votto's 1,989th game moved him past Larry Walker atop the list.

The Reds were able to celebrate a win as well thanks in large part to reliever Alexis Diaz, who faced bases-loaded and two-on situations with one out in the eighth and ninth innings, respectively, before retiring two straight batters on each occasion to retain a three-run lead.

"I think for any pitcher to get five outs to end the game is special," Reds manager David Bell gushed. "He looked really comfortable, not that it was easy."

Little has been easy for Minor this season. He's winless since June 13, a nine-game stretch in which he's gone 0-7 with a 5.89 ERA. The Reds have lost all nine of those games.

The 34-year-old has gone 2-5 with a 3.60 ERA in nine games, including eight starts, in his career against the Phillies. He hasn't faced them since September 2014 for the Atlanta Braves.