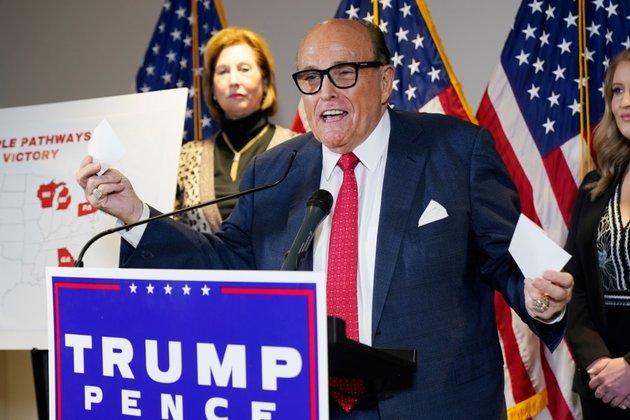 Washington - Ex-New York Mayor Rudy Giuliani, who, as personal lawyer to former U.S. President Donald Trump, tried to help him upend his 2020 reelection loss, was told Monday he was a target in the criminal election fraud investigation in the southern state of Georgia.

Lawyer Robert Costello told U.S. news outlets that prosecutors in Atlanta, the state capital, informed Giuliani's lawyers that he was under investigation for his role in trying to overturn Trump's narrow loss in the state, the first time a Republican presidential candidate had lost the state since 1992.

Giuliani is scheduled to appear Wednesday before a special grand jury investigating weeks of efforts by Giuliani, Trump and others in late 2020 and into the first days of 2021 to overturn Trump's 11,779-vote loss to Democrat Joe Biden in Georgia, a state in which 5 million ballots were cast.

At one point, on January 2, 2021, Trump pleaded in a taped telephone call with the state's top election official, Brad Raffensperger, to 'find' him one more vote than he needed to overtake Biden's lead in Georgia.

Georgia was one of several political battleground states about which Trump made erroneous claims that vote-counting irregularities had cost him another four-year term in the White House.

As it suspended Giuliani's law license last year, the New York state appellate court laid out much of his activity in Georgia on behalf of Trump. The court said he had made 'numerous false and misleading statements regarding the Georgia presidential election results.'

In one instance, the court said Giuliani had falsely claimed that tens of thousands of underage teenagers had voted illegally in Georgia, even though an audit by Raffensperger's office found that no one under age 18 had voted in the 2020 election.

Giuliani also played a key role among a group of Trump lawyers who pushed for naming alternate slates of electors favoring Trump to replace the official ones favoring Biden in the states where he defeated Trump.

In the United States, presidents are effectively chosen in separate elections in each of the 50 states, not through the national popular vote. Each state's number of electoral votes is dependent on its population, with the biggest states holding the most sway. Congress certified Biden's eventual 306-232 victory in the Electoral College.

Giuliani attorney Costello said his client would likely invoke attorney-client privilege and refuse to answer questions about his dealings with Trump when he appears before the grand jury.

News that Giuliani was a target in the Atlanta investigation, led by Fulton County District Attorney Fani Willis, came on the same day that another Trump supporter, U.S. Senator Lindsay Graham, lost his effort to avoid testifying before the grand jury investigating the election fraud allegations.

Willis has claimed that Graham made multiple phone calls to Raffensperger and his staff requesting that they reexamine some absentee ballots 'to explore the possibility of a more favorable outcome for former president Donald Trump.'

Lawyers for Graham say he has been told by prosecutors that he is a witness in the proceedings, not a target. He is now set to testify August 23.