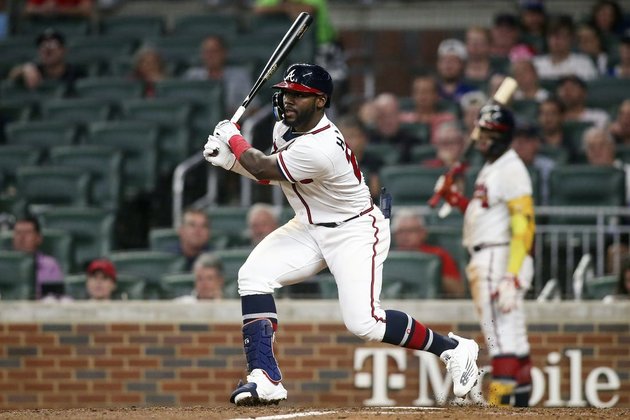 Braves center fielder Michael Harris II endured a rough night at the plate on Monday, going 0-for-4 with a strikeout as Atlanta beat the visiting the New York Mets 5-0.

After the game, Harris had more to celebrate than his team's win. The Braves announced that they signed the 21-year-old rookie to an eight-year, $72 million contract.

Club options at the end of the deal could tie Harris to the team through the 2032 season.

Harris, an Atlanta-area native, has made a good impression since making his major league debut on May 28. Arriving after Adam Duvall sustained a left wrist injury that eventually required season-ending surgery, Harris immediately took over as the Braves' everyday center fielder.

Through 71 games, Harris is hitting .287 with 12 homers, 39 RBIs and 13 stolen bases. His .825 on-base-plus-slugging percentage leads all qualified major league rookies.

The new contract will go through Harris' arbitration-eligible years and beyond.

Atlanta chose Harris out of Stockbridge (Ga.) High School with a third-round pick in the 2019 draft, and he was considered the organization's top prospect at the time of his promotion to the parent club.

US acts to reduce risks from space debris

ALBUQUERQUE, New Mexico: New Mexico district attorney Mary Carmack-Altwies has said that actor Alec Baldwin and up to four others ...

US again returning money to victims of Bernie Madoff, 88% recovered

WASHINGTON D.C.: The U.S. Department of Justice has announced that after nearly 14 years, the victims of Bernard Madoff's Ponzi ...

After sanctions, Russia says will build own aircraft, not rely on west

MOSCOW, Russia: Russia's state-owned engineering firm Rostec has said that the country's aviation industry will continue operating without the West, ...

US claims American-JetBlue alliance is anti-competitive

BOSTON, Massachusetts: The U.S. Justice Department has asked a Boston judge to force American Airlines and JetBlue Airways to scrap ...

Lego closes stores in Russia, being reopened under name World of Cubes

MOSCOW, Russia: After Danish toy maker Lego exited Russia due to Moscow's February invasion of Ukraine, 65 of its stores ...

GENEVA, Switzerland: In an effort to ease power shortages this winter, the Swiss government said it will temporarily loosen water ...

Lyft taxi service puts hold on hiring due to US recession

SAN FRANCISCO, California: Ride-hailing firm Lyft said it is freezing all U.S. hiring through the end of the year, in ...

DETROIT, Michigan: Ford Motor Co. has announced that it will invest $700 million in its Kentucky plant, which will assemble ...