VANCOUVER, BC / ACCESSWIRE / August 17, 2022 / Kingfisher Metals Corp. (TSXV:KFR)(FSE:970)(OTCQB:KGFMF) ('Kingfisher' or the 'Company') is pleased to announce updates on diamond drilling at the 100% owned 511 km2 Goldrange Project. Goldrange is located approximately 25 km south of the town of Tatla Lake in the Chilcotin region of Southwest British Columbia.

Dustin Perry, CEO states 'Drilling at the Cloud Drifter Zone is off to a great start with zones of mineralization in all drill holes to date which significantly expands the footprint of the mineralized system. We continue to see a wide variety of mineralization styles across a broad area proving the robust nature of this gold system. The drill will be moving back to the Eastern Target Area shortly where we will begin drilling step out holes from the promising mineralization in GR22-022. We anticipate that our upcoming diamond drill assays will guide follow-up drilling of these target areas.'

The Goldrange Project covers a significant deformation zone with numerous precious metal veins across the project. Mineralization at Goldrange occurs within the orogenic Yalakom Gold Belt, which is host to the Bridge River District that includes the past producing Bralorne Mine. Several areas of historical hand mining are located within the project and date back to the 1930s.

The first two drill holes (GR22-021 and GR22-022) in the Eastern Target Area confirmed the presence and continuity of a disseminated sulfide and stockwork style of veins not yet identified in drilling. Mineralization styles in drilling includes disseminated, breccia, and vein-hosted chalcopyrite, pyrite, and arsenopyrite. Stockwork and disseminated mineralization styles in surface rocks in this area grade up to 9.7 g/t Au and coincide with strong multi-element (Au, Ag, As, Cu, Bi, Te, Sb, Zn, Mo, W) anomalism in soil geochemistry.

At the Eastern Target Area, mapping and rock sampling of limited rock exposures in forest cover indicate the presence of both a high sulfide and a high vein density domain with a homogeneous mineralization style. Based on the homogeneous textures and consistent vein densities, there is potential for continuity of grade laterally between outcrops and vertically at depth.

GR22-021 collared downslope of an outcrop that grades up to 6.8 g/t Au and drilled to the southeast. Drilling encountered mineralized quartz diorite from surface to 21 m and another interval of stronger quartz diorite hosted mineralization from 51 m to 65 m (Figure 2). The Company believes that the drill hole did not intersect the full thickness of this body and future drilling will test the full thickness body by drilling north from upslope. Further drilling will aim to outline the orientation of the intrusion that is host to mineralization. 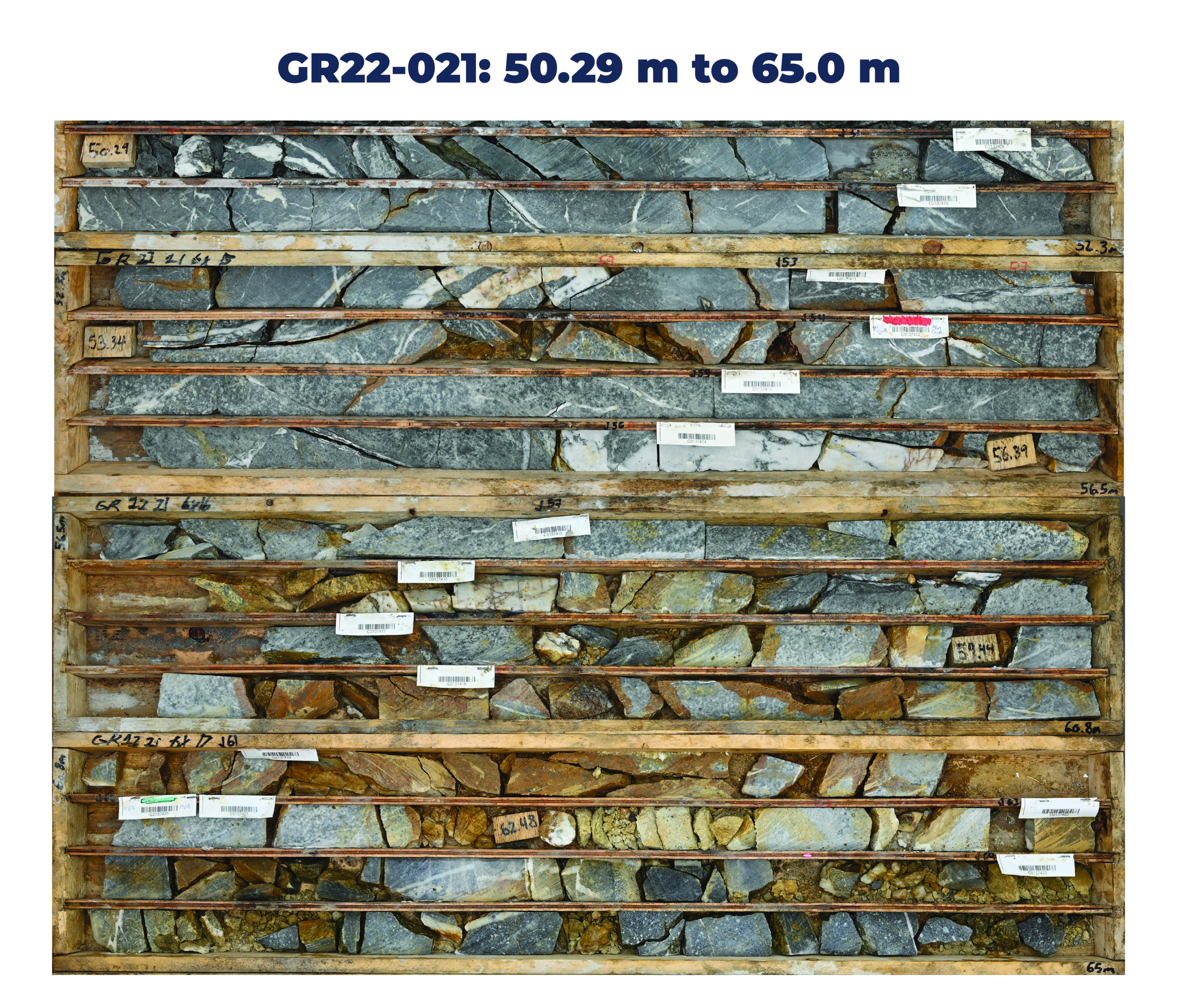 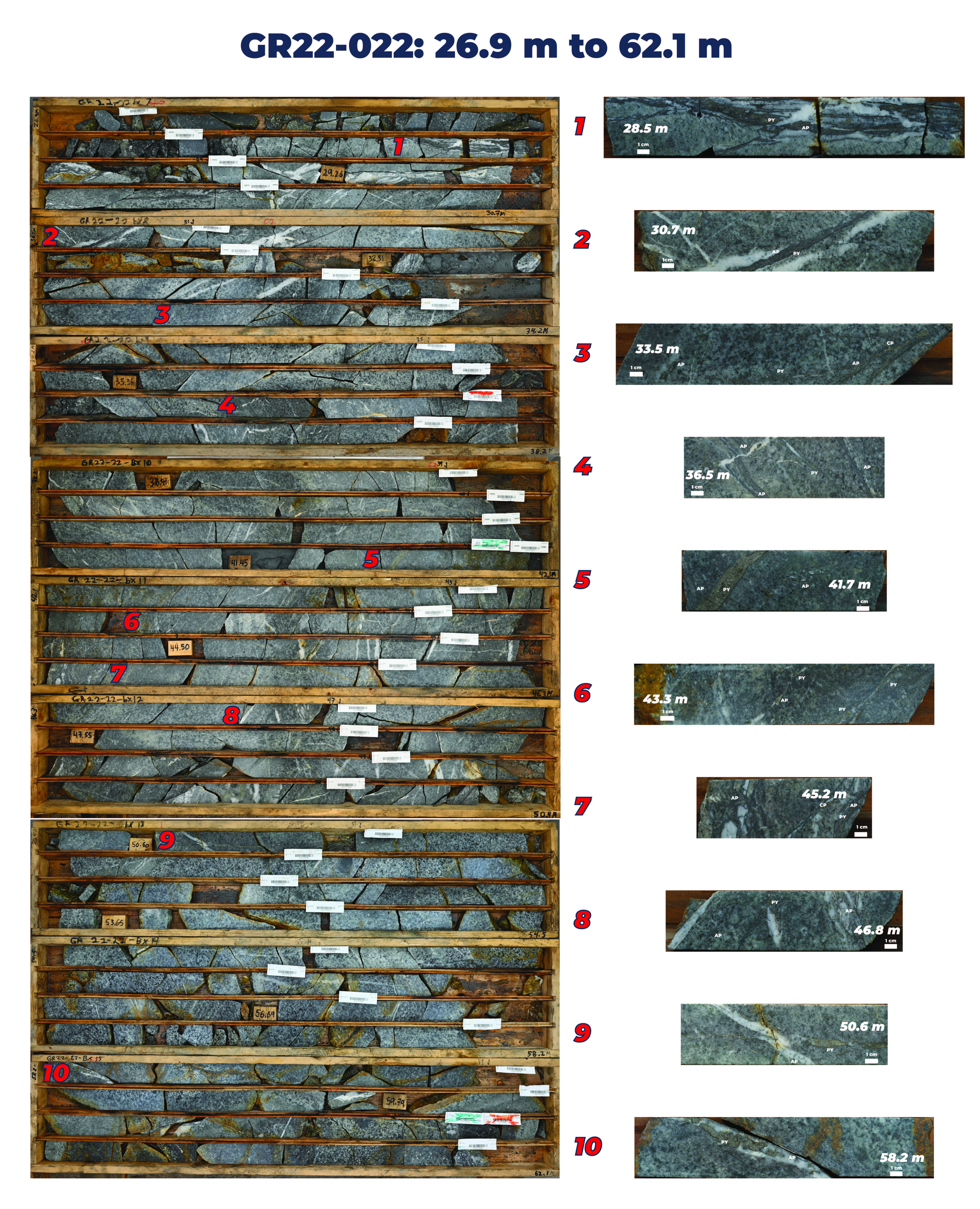 Diamond drilling at the Pad 400 Target Area follows up on vein and breccia hosted mineralization from the 2021 drill program. Highlights from this area in 2021 include 73.4 g/t Au over 1 m from pyrite-ankerite veins and 6.88 g/t Au over 9 m from sulfide cement breccia. This year's drilling is testing the lateral and down-dip continuity of high-grade gold along an easterly structural trend that dips moderately south. Drill holes into this trend confirmed the location and presence of high-density quartz-sulfide veins parallel to the modelled structures. This important easterly structural trend in the lower Cloud Drifter Zone correlates with multiple high-grade Au intercepts in 2021 drill holes. The structural expression is more than 25 m true thickness, which also coincides with a coincident chargeability-conductivity geophysical anomaly.

Drilling in this area returned broad intercepts of altered and dense veins in quartz diorite in all drill holes (GR22-015 to GR22-020) including GR22-018 which intercepted altered and mineralized quartz diorite from 61.80 m to 174.20 m (Figure 4). An additional drill pad is built in the Pad 400 Target Area and drill holes will be oriented in a westerly direction from that pad. 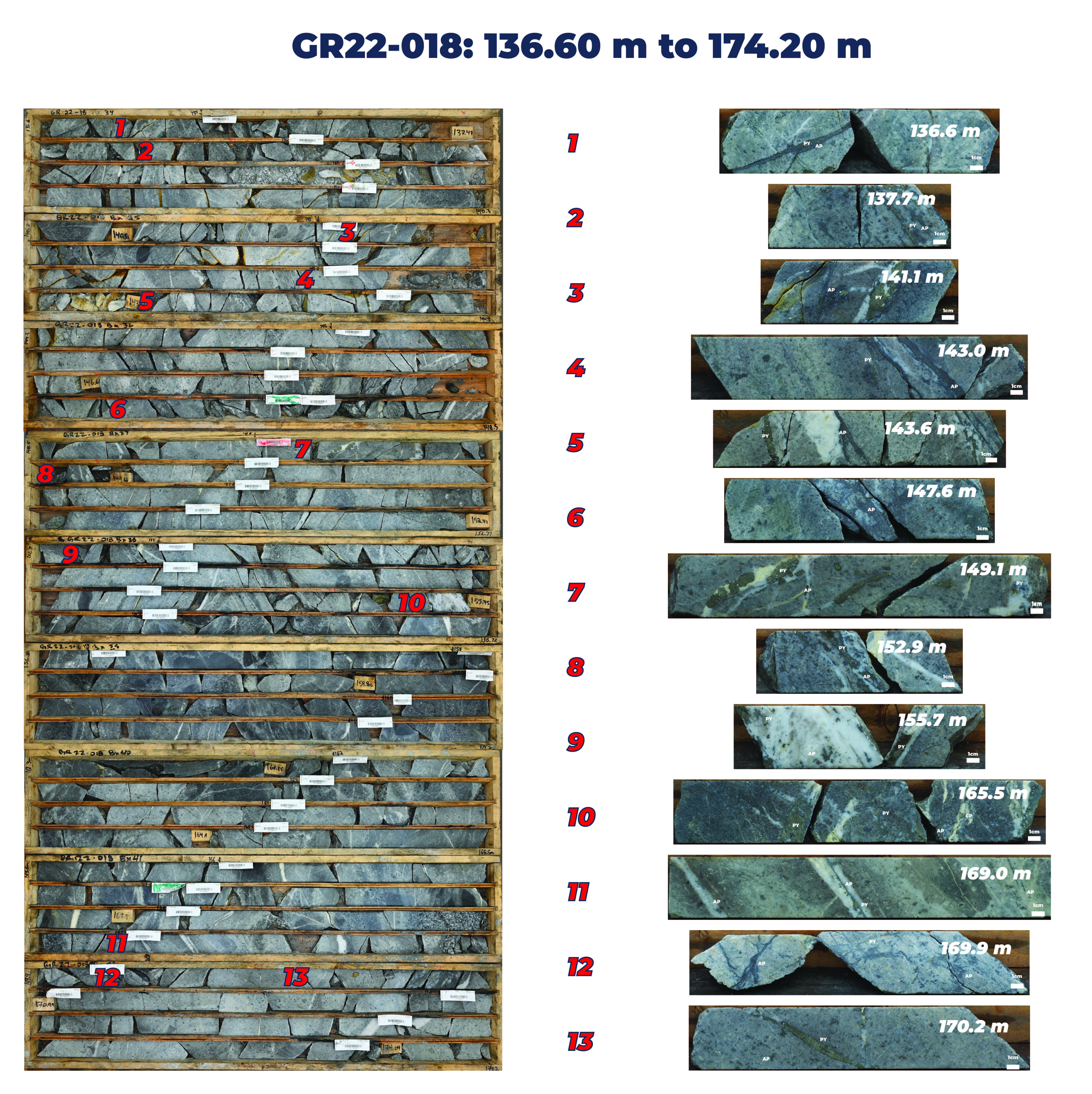 Altered quartz diorite was identified in GR22-023 to GR22-025 and is similar in appearance to the Pad 400 Target Area as well as at the Eastern Target Area. This gives the intrusive hosted target over 800 m of strike length, open in multiple directions. Additional styles of mineralization are illustrated in Figure 5. A feldspar porphyry containing disseminated molybdenite and chalcopyrite was intercepted in GR22-023 and points towards a potential higher temperature heat source for the mineralizing system. 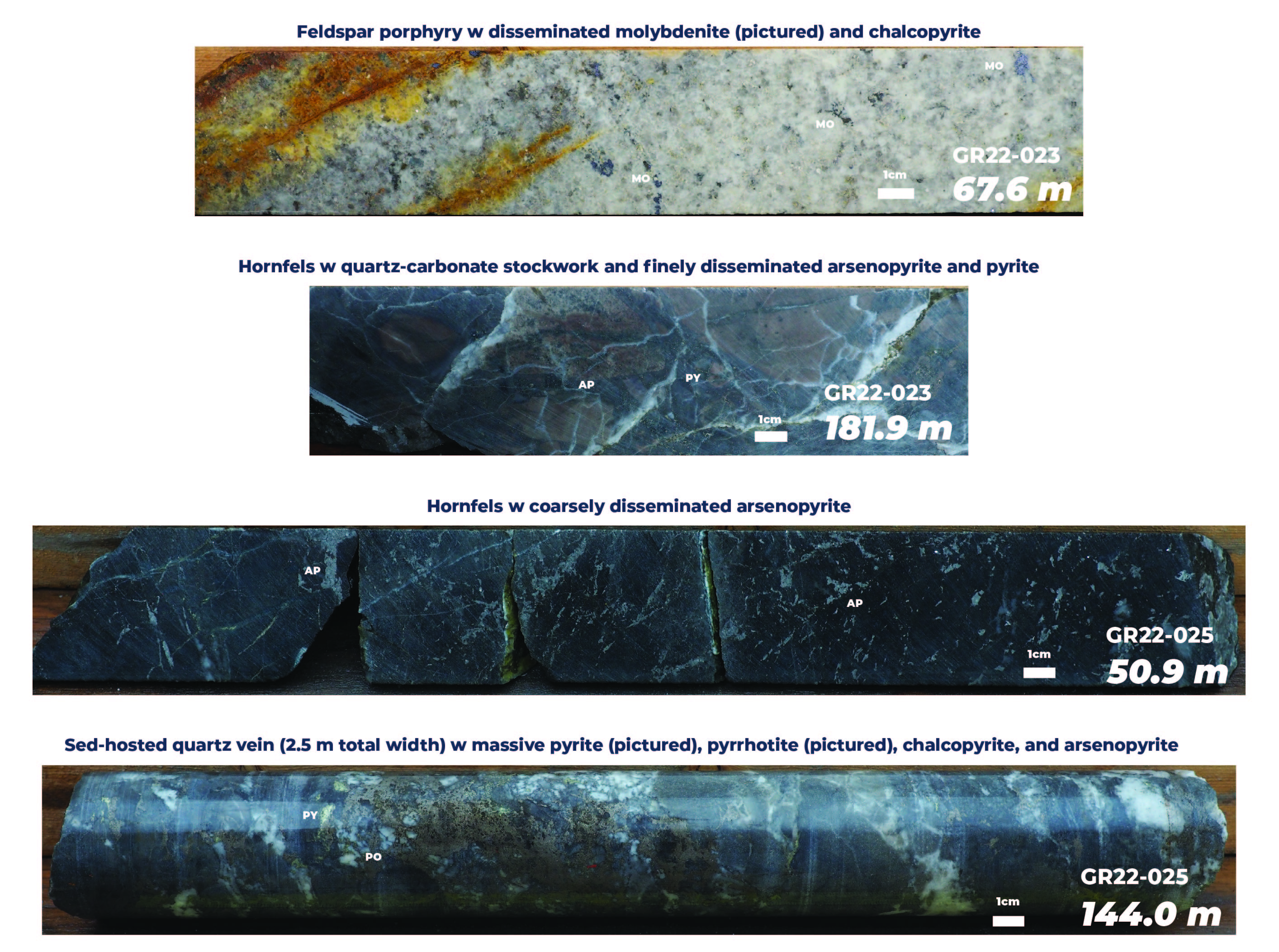 Diamond drilling is underway at the Western Target Area gossan pad where it is drilling northeast underneath the large gossan and geochemical anomaly after which it will test to the northwest under the Argo showing.

Once completed, the drill will move to the Eastern Target Area where it will continue to test the promising intrusive hosted mineralization intersected in GR22-021 and GR22-022. Future drilling will be completed from the same pad as GR22-022 and then step out drilling will occur to the east and west.

Additional IP surveying is underway at the Eastern Target Area and Day Trip Zones to test for deeper feeder structures that will inform targeting at both areas for diamond drill testing later this season.

Dustin Perry, P.Geo., Kingfisher's CEO, is the Company's Qualified Person as defined by National Instrument 43-101, Standards of Disclosure for Mineral Projects, and has prepared the technical information presented in this release.

Neither the TSX-V nor its Regulation Services Provider (as that term is defined in the policies of the TSX-V) accepts responsibility for the adequacy or accuracy of this release.

These forward-looking statements and information reflect the Company's current views with respect to future events and are necessarily based upon a number of assumptions that, while considered reasonable by the Company, are inherently subject to significant operational, business, economic and regulatory uncertainties and contingencies. These assumptions include; success of the Company's projects; prices for gold remaining as estimated; currency exchange rates remaining as estimated; availability of funds for the Company's projects; capital, decommissioning and reclamation estimates; prices for energy inputs, labour, materials, supplies and services (including transportation); no labour- related disruptions; no unplanned delays or interruptions in scheduled construction and production; all necessary permits, licenses and regulatory approvals are received in a timely manner; and the ability to comply with environmental, health and safety laws. The foregoing list of assumptions is not exhaustive.

The Company cautions the reader that forward-looking statements and information involve known and unknown risks, uncertainties and other factors that may cause actual results and developments to differ materially from those expressed or implied by such forward-looking statements or information contained in this news release and the Company has made assumptions and estimates based on or related to many of these factors. Such factors include, without limitation: risks related to the COVID-19 pandemic; fluctuations in gold prices; fluctuations in prices for energy inputs, labour, materials, supplies and services (including transportation); fluctuations in currency markets (such as the Canadian dollar versus the U.S. dollar); operational risks and hazards inherent with the business of mineral exploration; inadequate insurance, or inability to obtain insurance, to cover these risks and hazards; our ability to obtain all necessary permits, licenses and regulatory approvals in a timely manner; changes in laws, regulations and government practices, including environmental, export and import laws and regulations; legal restrictions relating to mineral exploration; increased competition in the mining industry for equipment and qualified personnel; the availability of additional capital; title matters and the additional risks identified in our filings with Canadian securities regulators on SEDAR in Canada (available at www.sedar.com). Although the Company has attempted to identify important factors that could cause actual results to differ materially, there may be other factors that cause results not to be as anticipated, estimated, described, or intended. Investors are cautioned against undue reliance on forward-looking statements or information. These forward-looking statements are made as of the date hereof and, except as required under applicable securities legislation, the Company does not assume any obligation to update or revise them to reflect new events or circumstances.