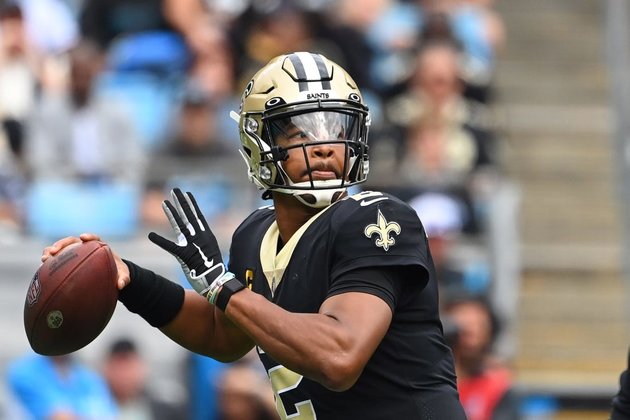 New Orleans Saints quarterback Jameis Winston and wide receiver Michael Thomas did not participate in practice on Wednesday in London.

Andy Dalton took first-team reps and versatile jack-of-all-trades Taysom Hill also took snaps at quarterback on Wednesday. Winston injured his back in New Orleans' 27-26 win over the Atlanta Falcons in the season opener on Sept. 11 before tweaking his ankle last week in practice.

"Really it's more just trying to rest and trying to make sure it's healthy," Allen told reporters after practice.

Winston, 28, has completed 73 of 115 passes for 858 yards with four touchdowns and five interceptions in three games this season for the Saints (1-2), who "host" the Minnesota Vikings (2-1) on Sunday.

Dalton, 34, has yet to throw a pass this season. He completed 149 of 236 attempts for 1,515 yards with eight touchdowns and nine interceptions in eight games last season for the Chicago Bears.

Hill, 32, was ruled inactive for New Orleans' 22-14 loss to the host Carolina Panthers last Sunday. He had been nursing an injury to his ribs.

He has yet to throw a pass in two games this season. He has seven rushes for 95 yards and a touchdown and one catch for two yards while playing as a tight end.

Hill threw for a career-high 979 yards to go along with four touchdowns and five interceptions in 2021.

Thomas, 29, is nursing a foot injury sustained in Sunday's loss to the Panthers. The three-time Pro Bowl selection had 16 catches for 171 yards and a team-leading three receiving touchdowns this season.

LONDON, England: Richard Griffiths, chief executive of the British Poultry Council, said nearly half of all turkeys and geese in ...

The country has been gripped by violent protests after the death of a woman who allegedly wore an "improper" hijab ...

AUSTIN, Texas: Elon Musk has said that he expects a wireless brain chip developed by his company, Neuralink, to begin ...

In major break from past, Egypt to build 21 desalination plants

CAIRO, Egypt: Ayman Soliman, CEO of Egypt's Sovereign Fund, said as part of the first $3 billion phase of a ...

2022 will see historic high farm incomes in US

WASHINGTON D.C.: The U.S. Department of Agriculture reported that as producers are benefitting from high global grain and oilseed demand ...

NEW YORK CITY, New York: Pfizer is set to invest more than $2.5 billion in its drug manufacturing operations in ...

NEW YORK CITY, New York: The infant formula shortage that has persisted in the U.S. for nearly a year, is ...

Apple returns to Twitter after Musk meeting with Tim Cook