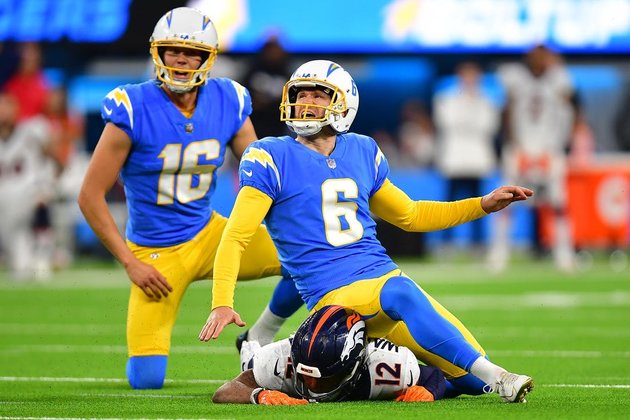 Dicker kicked the game-winning 37-yard field goal in a 20-17 victory over the Atlanta Falcons in his team debut in Week 9. He was signed to the practice squad three days before the game when kicker Taylor Bertolet went on injured reserve with a quadriceps injury, then promoted to the active roster.

Hopkins strained his right hamstring in a Week 6 contest against the Denver Broncos on Oct. 17. Playing through visible pain, Hopkins went 4 for 4 on field goals, including the game-winner in overtime to give Los Angeles a 19-16 victory.

Dicker will likely be the Chargers' placekicker for at least the next four games, the span Hopkins must miss before he becomes eligible to be activated off IR.

Dicker, an undrafted rookie out of Texas, appeared in one game for the Philadelphia Eagles before the Chargers picked him up while Hopkins was hurt. He kicked the game-winning 23-yard field goal against the Arizona Cardinals in his NFL debut for the Eagles in Week 5.

A practice squad promotion in each of the last three weeks, Dicker has been perfect for the Chargers, making all six extra points and all seven field goals he's attempted, with a long of 47 yards.

Indonesia to outlaw sex outside marriage

JAKARTA, Indonesia: In a legal overhaul that critics say could curb freedoms and police morality in the world's third-largest democracy, ...

Hawaii braces for eruption on Big Island of Honolulu

HONOLULU, Hawaii: Officials are concerned that a major eruption of the Mauna Loa volcano on the Big Island of Hawaii ...

BUENOS AIRES, Argentina: A massive wave struck the Viking Polaris cruise ship this week as it was sailing toward the ...

After years of upheaval, US judge throws out Huawei fraud indictments

NEW YORK City, New York: Last week, a U.S. judge has dismissed an indictment against the chief financial officer of ...

China to sell electric vehicles in Japan in 2023

Change comes to US auto union as reformers win elections

NEW YORK, New York - Stocks in the U.S. and around the world fell on Wednesday although losses were mostly ...

Hearing aids now sold without prescriptions in US

WASHINGTON D.C.: Hearing aids can now be sold without prescriptions from a doctor in the U.S., making it easier and ...

Musk confirms that apple to resume advertising on Twitter

SEATTLE, Washington: Amazon.com is planning to resume advertising on Twitter, pending some security tweaks to the company's ads platform, purchasing ...